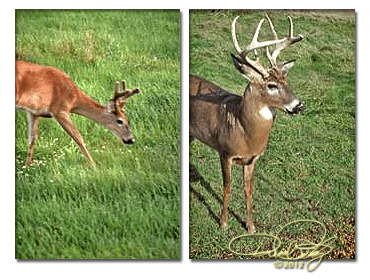 A single belief is a continuing thread that runs through the management of any deer herd. A buck needs time, lots of time, to grow to produce big antlers.

Big-antlered bucks don’t just happen. In much of Michigan, a buck seldom lives long enough to really produce big antlers. Often, the first buck with bone on his head that walks past a hunter will get shot.

There is little or no deliberation for most people. Many hunters that see antlers of any size will shoot that buck, and check for size later. The vast majority of these bucks are 1 1/2-years-olds with their first set of antlers.

They get shot with a bow or firearm long before they have any potential for serious growth. For many hunters, killing a buck of this size is just an ego stroke. It offers them bragging rights. Nothing more or less.

Wow! They get to brag about shooting a little basket rack 6-pointer. Or, even worse, they drop a spikehorn. It allows them to say “I got my buck, did you?”

My answer to that statement is: Who cares

Bucks don’t just hit the ground at birth with a big set of antlers. It takes time for them to grow, and on average, 3 1/2 years is the minimum. If a buck can reach 4 1/2 years, there is some possibility of seeing the great potential this animal has.

Drop a 1 1/2-year-old buck with his first rack, and that animal will never get larger. The hunter would be far better off, and do the local deer herd a favor by letting the little buck walk and shoot an anterless deer.

I’ve long maintained that shooting an old doe that has been around for several years is much more difficult than shooting a buck. Bucks can gain some instincts over time, and they may go nocturnal, but stick with a buck long enough and he’ll make a mistake. Old does seldom make a life-threatening mistake.

Time, or if you prefer, age is one major factor in a buck living long enough to grow a big rack. It takes three or more years for their antlers to grow thick with long beams, a wide spread and long points.

The only way a buck can live in today’s society where they will wear the rack of a big monarch is for hunters to give them a break by shooting a doe instead. Another possibility is if they travel the first year near thick cover, and jump into it at the first gunshot. There, if they are naturally cautious, will keep their head down and not venture out until long after dark.

Everyone talks about deer “going nocturnal,” and heavy hunting pressure causes that to happen. If the deer smell too much human scent, see too many sportsmen walking to their stands, or catches a hunter moving while on stand, it sends them scurrying for the nearest patch of thick cover.

If it happens twice to a decent buck the animal may choose to hide out until all the people have left the woods. The bucks then come out, feed and jump back into their sanctuary. Hunting pressure and hunter errors forces deer into this nocturnal feeding-travel pattern.

A plan for hunting success down the road

The bottom line for sportsmen today is to spare some young bucks, and if everyone in the immediate hunting area subscribes to and practices this form of deer management, there will be more and larger bucks within three years.

Hunters can remove excess doe numbers, spare the button bucks, and other young bucks, and in time their chance of seeing and shooting something with an antler spread of at least 18 inches will be much better.

Cut these young bucks down when they still have a puny rack, and you’ve accomplished nothing toward about building a local herd of better than average deer.

It’s a tough sell because there are countless people who listened to their Daddy and old Grandpa who continue to mutter the old folklore idiocies, such as: “You can’t have more deer by shooting the mother deer.”

That old saw has been proven wrong for so many years it’s a wonder anyone still believes it.

We let young bucks live, and if you want good bucks on your land, you better do the same. Big bucks won’t show up overnight, but sparing small bucks for three years will do the job nicely.