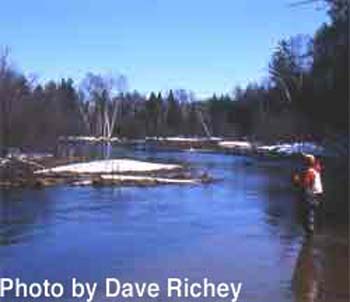 It’s a well known fact. Ask any beginning steelhead fisherman, and they will tell you just how hard these lake-run rainbow trout are to catch. Many spend years before accidentally hooking one.

Books have been written about them. I’ve written three on the topic myself, including a limited edition, and even though when pushed hard, I will admit they can be hard to catch when they are not in the river just yet.

If the weather stays on the warm side, we could see some steelhead enter the river by this weekend. But don’t go out the door with your insulated waders and rod just yet.

Don’t get too excited but watch for several days of warm weather.

— and the mystique that surrounds these game fish trouble some anglers. The mystery of this lake-run rainbow trout is usually part of the smoke-and-mirrors show that advanced anglers talk about. Contact me at this email address to get information about my steelhead books: Scoop’s Books

These freaky falsehoods are basically tactics to drive neophyte anglers away from a favorite fishing area, but if an angler does not know the river, they can’t catch fish with any degree of regularity. Locate some fish, as guide Mark Rinckey of Honor and I do with a great deal of regularity, and some anglers may think this highly-touted game fish are easy to catch.

Any screwy suspicions spoken about steelhead fishing is nothing but reverse propaganda in the minds of good fishermen. This sport is easier than it needs to be, and it’s certainly easier than others would have you believe.

Catching steelhead can be downright simple … at times. It can be extremely difficult at times. Savvy fishermen soon learn to take the good with the bad.

Be there, at the right time, fish the water properly and steelhead are not much more difficult to catch than bluegills or yellow perch are in the spring. One principle applies to all game fish species: Anglers must find the fish, and cast well, before they can taste the sweetness of angling success.

Fly-fishing for steelheads is my favorite way to catch them.

There are many ways to catch steelhead and this holds true with most game fish species. All methods produce during certain periods, but they may work best at other times of year. For me, stalking visible steelhead on shallow rivers and casting flies to them is as good as it gets, and I made a living for 10 years guiding fly fishermen to good catches using some of the following methods.

•One thing to remember is that experience on the water is necessary. I’ve taken beginning anglers, and under my tutelage, had them catching steelhead the first day. They thought the fish were easy to catch.

•The problem with fly fishing is that people are in a big rush. They want fish now, and bail off the river bank, go splashing into the clear river and spook fish off spawning beds. They then wonder why they can’t catch anything.

•Forget about wading up or down the river, and spend more time on the river bank looking for fish. Walk slowly, stop often and study the water through polarized sunglasses. It’s a method much like still-hunting deer, and if they try to rush the process, they fish spook. The deer run away and the steelhead swim into the log jams.

•Slow down – way down — and take your time. My toughest problem when guiding steelhead fishermen was curbing their enthusiastic impatience. This old method worked back in the 1960s and it still works now providing people follow some easily understood rules.

Don’t get into the river until a fish is found. Avoid splashing around.

•Stay out of the water unless casting to visible fish. Don’t become another stupid fisherman that wades downstream and spooks every steelhead around. Barring a quick warm-up, snowmelt and run-off, anglers have at least four to six weeks before steelhead numbers begin moving upstream. Use this time period to study these tactics, memorize them and use them this spring.

•Instead of wading downstream, walk the bank, stop, start and look for fish. Use any available cover and a successful stalk may take 15-30 minutes to move close enough for a short and accurate cast.

•Wear a billed cap, pull it low over Polarized sunglasses, and pause frequently to study the water. A fresh-run mint-silver female is most difficult to spot in the water, and sometimes all that can be seen is a shadow. Males are darker colored, and their gaudy gill covers and cheeks are easily seen. Don’t look for the whole fish; often all you’ll see is a tail, a white mouth or a shadow apparently moving across the bottom.

•Watch the fish and study them. If they are going on and off the bed, it means they are spooky. Relax, take your time, and wait until the hen starts rolling up on her side and the male fertilizes the eggs with a jet of white milt. Remember, if nothing else: never fish for the female; try only for male fish.

Fish only for male (buck) steelhead.

•Why, you ask?
It’s easy to figure out. There are usually more males than females, If you spook a female, it will dash away and hide. If there is no hen present, there is no reason for males to hang around.

•Which fly to use?
The old philosophy is always a good bet. Use bright attractor patterns on bright days, and dark patterns on overcast days. Use a tippet or leader testing six pounds, and perfect your accuracy somewhere other than on the river. Plop a fly down on top of a fish and it will spook. Carry several bright and dark patterns in sizes No. 4, 6 and 8, and experiment with them.

•Ease slowly into the water and move softly without splashing the water or crunching gravel underfoot. If the fish start moving back and forth, stop, remain still, and wait for them to resume spawning. Take your time, and ease gently into casting position. It can take a long time, and I’ve spent hours trying to catch a gaudy buck steelhead. This method requires constant attention to detail, great patience and accurate casts. Don’t try to hurry things.

•Study the water current and depth. The fly must be cast far enough upstream to be scratching gravel when it comes to the male. If the female hits the fly. do nothing. Hook and fight the female, and all the males will disappear. Hook a male, and it’s not uncommon to catch two or three fish without unduly spooking the hen or harming the resource.

•The male will often move out of the way of a fly. Repetitive casting angers the fish, and they will often hit. Watch the fish’s head, and when it moves two or three inches when the fly is near, it has the fly and is moving it out of the bed. Set the hook. If you wait for a hard strike, you’ll never hook a spawning spring steelhead.

Don’t wade up and down the rivers and spook fish.

Common courtesy has its place on a spring steelhead stream. If you spot an angler up ahead casting to bedded fish, walk wide around the area away from the bank. Don’t wade up or down the river past him and spook his fish. If you are fishing to bedded fish, and see an angler coming, holler and politely ask them to make a wide detour around you and the fish. People with common sense will do so. Stupid people with no manners will not!

Those who never had any brains or too little fetching up will ignore your request. A steelhead isn’t worth getting into a fight over, but I’ve seen days when I wish I’d taken those Charles Atlas courses offered when I was a kid.

This is just one of many steelhead techniques but it happens to be my favorite, and in the future, we’ll share other methods that produce. But one thing to remember is to learn something new every day.

It’s hard to do, but trust me. Unspooked steelhead are much easier to catch than those that have been dodging snag hooks, clumsy wading, and people who care nothing about the rights of other people. Too many folks want a steelhead at any cost, and as quickly as possible, but they have no clue about how to go about catching them.