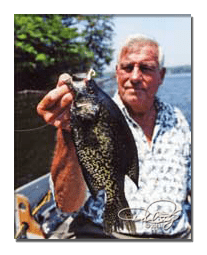 The Daily, The Water, Thoughts

The late John Cartier with a big crappie from Michigan’s Hamlin Lake.

Very few things about fishing are really new. Granted, new reels, lines and lures may be new and different, but when it comes to catching fish, new techniques are slow to be developed. Most of what we really know is isn’t really new, but  occasionally an angler may find it new to them,

I’m so mindful of a day I spent several years ago with the late John Cartier of Ludington, Mich. He was the long-time regional field editor for Outdoor Life magazine, and he was writing a book on cooking fish. My wife Kay was doing the lay-out for his self-published book, and we were visiting. A mix of business and pleasure.

“Feel like catching a bunch of crappies?” he asked. “It’s mid-May, and I’ve got a sure-fire method for locating these tasty game fish, and once we’ve found them we can anchor and cast to the fish. Pere Marquette Lake has an excellent population of them.

The hope of learning a new fishing method was good news to me.

I’m almost always game for catching fish, and was more than a little curious about his method. It turned out that his method was a take-off on an old method of slow trolling a No. 0 Mepps Aglia spinner with a silver or gold blade. He tied a short leader to the hooks, tied in a No. 12 treble hook, draped part of a nightcrawler on the treble hook, and began trolling it slowly over eight feet of water.

“The trick,” he said, as we began letting out our lines on both sides of the boat, “is to troll this rig about 40-feet behind a slow-moving boat. Set your drag fairly light because crappies have a paper-thin mouth. A tight drag will tear the hooks out and you’ll lose the fish.”

We’d covered perhaps 30 feet, when my ultra-light rod with 6-pound line jerked back toward the stern of the boat, and no hook-set was needed. I saluted the fish softly, and the black-and-white speckled crappie rose to the surface behind the boat. In he came, and the first of many crappies went into our live basket.

“Seen this method before?” Cartier asked. “I’ve been using it for many years, and it’s a quick and easy way to find crappie concentrations in the spring. We’ll keep trolling, and see if we can find a bunch of them. There are several fish shelters of old Christmas trees up ahead that a neighbor placed on the ice several years ago, and they are weighted down with cement blocks. The fish like to suspend around those brushpiles.”

We headed that way, and less than a minute later, just as Cartier told me we were going past the brush, we had a strike at the same time. Both of us were soon lost in the delight of hooking slab crappies on light line. He netted mine and then his, and held up both fish for inspection.

These crappies were big fish and hard fighters.

They were about 14 inches long with a big mouth, and when laid in Cartier’s palm, they covered his hand and wrist. They followed their cousin into the wire mesh live well.

I told Cartier the only difference between my method and his was I used a small willow-leaf spinner with a single long-shank No. 10 gold hook. The method meant keeping the lure down about four feet, zigzagging a little one way or the other, and never getting into too deep water this early in the season. The fish like the lures presented slow, a good distance behind the boat, and the spinner blade barely turning over. Using a small electric trolling motor allows a slow and quiet approach when these fish are in the shallows.

“What I like about this particular method is that it’s quite easy to survey a small lake or to section off various areas on a larger body of water, and it seldom takes long to find the fish. I usually start fishing in shallow back bays with a black marl bottom and some vegetation, brush or weeds. The water warms faster here, and that gets spring fish going.

This little bay was near his lakeside home. and it wasn’t hardly big enough to be called a bay but it produced some nice fish. We head on down the lake, and finally found a spot where we caught several fish. We anchored, and began casting the same rig.

The crappies were there, and apparently hungry. We caught one fish after another, and soon had caught a limit  each of these tasty fish.

We each caught a limit of fine-eating game fish.

“It’s time to quit,” he said. “We can head in, clean the fish and there’s nothing better than a passel of spring crappies deep fried to a golden brown. Cartier’s fish cook book has numerous recipes that can be used for cooking crappies, and he had a captive audience of hungry people.

He deep-fried some of the fish, and grilled some with another of his recipes, and along with some fried potatoes and baked beans, it was a fitting end to a fine day with an old friend. His fish recipes are interchangeable, and just a recipie and try it. Cartier been gone for a few years now, but this hard-boiled outdoor writer was a good and kind friend, an excellent writer and very knowledgeable about fishing and hunting. And I miss him.