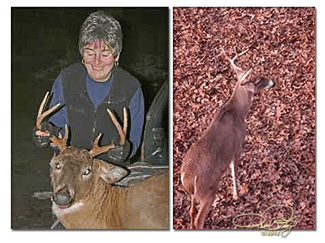 You may have read this before because I’ve posted it a few times over nine years. If so, revisit it, determine for yourself how it may apply to your hunting techniques.

Ever see a buck coming through the woods and suddenly it flees for no apparent reason?  Have you ever had a doe stop upwind of your stand, snort, blow, stomp her foot and run off even though the wind was right and you hadn’t moved.

Sure you have. It happens to everyone on occasion. What follows may disturb some hunters, could cause other sportsmen to wonder if this topic is true, and if so, how does it happen?

New hunters arrive on the scene every year, and probably haven’t read this before or missed it when it was published years ago. It needs to be revisited every so often.

Trust me on this: This topic will be a quantum leap for some deer hunters when they read it. I’ve stated my opinions at deer-hunting seminars I’ve given over many years, and some folks sit in total disbelief. They look as if they’ve been sucker-punched.

Don’t stop reading just yet. These thoughts, if you accept and think logically about the topic, may make you a better deer hunter. We’ll be talking about your mental rather than physical actions.

My many years of testing this theory

It’s not important that hunters believe as I do, but over 40-plus years I’ve tested this theory on countless occasions in many scattered locations. Each time it is tested, the result is the same. I strongly believe what follows to be true, and all I expect of readers is to study and decide if they believe and trust it.

Know this before we go any further. There is much that modern science doesn’t know about the brain, brain waves, and how it affects people and many of the wild animals we hunt.

My thoughts on spooking deer

Here goes: I believe, being a very capable and deep thinking predator, that deer — especially does — can sense the presence of danger without the benefit of movement, noise, scent or other stimuli. I once hunted mountain lions in northern Arizona, and my guide told me the reason he feels cougars kill mostly mule deer bucks is because those deer are so full of themselves they act and feel immune to danger.

They are not alert or attuned to the presence of danger. Does, on the other hand, are constantly alert to the possibility of nearby predators as they try to protect their fawns from predation.

My thoughts are pretty straightforward. I believe that thinking hard about killing an incoming buck or doe can transfer some type of danger signal to the animals. Are human thoughts carried by brain waves? Do these vibes, for lack of a better description, throw out a silent alarm that does can pick it up much easier than bucks?

Clear your mind of all predatory thoughts

I never think, after spotting an incoming buck or doe that I am going to shoot that animal. My brain stays in neutral, idling without conscious thought. I purposely avoid thinking about shooting and killing the animal. I may and often do spend that time thinking about my next article to be written.

My belief is to never stare at a buck or doe. Looking into a deer’s eyes seems to allow that animal to feel or sense human presence. My thoughts remain neutral, and when I draw, aim and shoot, I’m concentrating on my aiming point but am not thinking about killing the animal.

Testing this theory over many years has proven informative. My normal hunting method is to allow my eyes to sweep over the deer without lingering on any part of its head or body. It’s easy to establish the animal is a buck if antlers are visible, and that data is stored in my mind. I know it is a buck but no longer think about it, and I never dwell on such thoughts, which I feel are counterproductive.

Instead, I think about going hunting the next night, which stand may be productive under the current wind direction, or I’ll recall something that has nothing whatever to do with hunting. I could just as easily think about painting the basement walls, which is a horrid thought, even when trying to fool a nice buck.

My main train of nonviolent thoughts

However, my mind knows why I’m out there, and that is to possibly shoot a buck or doe. However, my mind focuses on another thought or topic, or on nothing at all, and when it tells me it’s time to shoot, the bow is drawn, the red-dot settles behind the front shoulder and the arrow is gone before my mind tells my finger to shoot.

The deer never senses a threat or any unease. It doesn’t feel my predatory instincts coming its way, and the deer remains relaxed. Calm and cool thoughts or even not thinking at all is far preferable than telling yourself that the shot will go through its lungs and heart. That may happen, but if you don’t think hard on it, I’m convinced the deer will not bolt unless you move or make a sound at the wrong time.

On the other hand, I’ve often thought about killing the buck as a specific test. I’ll think: Here comes a buck, and look at those antlers. My eyes scan the bone on the buck’s head, and then I look at its eyes, and then strongly focus my attention on the heart-lung area.

The buck, suddenly alert, turns his head to look around. My eyes lock on his, a predator against a nice buck. His head turns slowly away, and I come to full draw, think about driving the arrow into the chest cavity, and at about that time, the animal suddenly bolts off in panicked flight.

There has been no noise or sudden movements on my part, and no way the deer could smell me. But my thoughts were keenly focused on shooting that animal, and perhaps this comes from my many years of hunting experience and shooting many deer. Perhaps my vibes are stronger than those of others who have largely been unsuccessful.

A human example to illustrate my point

Think of it this way. I no longer drink, but back in the day, my entering a bar was always an experience. If I were a stranger, I’d immediately sense the vibes of other people looking at me, and then would come a strong feeling that someone was staring intently in my direction. With practiced determination, my eyes would scan the room until the person staring at me was located.

It was then I’d size up the situation. Is this a friendly person or one who wants to put knuckle bumps on my noggin? If I sensed agitation or aggressive hostility, I’d turn and walk out while it was possible. It’s the same thing with deer. Flight is always preferable to fight.

An example of street smarts

In some areas they often say a person has “street smarts.” Why. Pray tell, don’t deer have “woods smarts?” They do, and their instincts are more finely honed toward survival than yours or mine.

If deer sense danger, however it is transmitted to them, it becomes an instinctive reaction. It’s like an adrenaline rush: it triggers the fight or flight response. Deer don’t grow large antlers by ignoring these little niggling feelings. I draw the line at granting deer human-like qualities, but am convinced these animals can pick up hostile vibes from someone trying to shoot it with a bow, which are invariably close shots.

Deer can do the same thing, as humans although how they process this invisible information is an unknown factor. Years ago, while shooting some of the deer photos needed for stories, the deer would hear the shutter click, look around, and nothing happened. Minutes later another photo or two would be taken, and the deer would become used to the noise. Nothing happens, and they would soon relax.

It’s strange but deer seem to sense when a hunter or photographer means no harm, and while an old doe may go charging off, if they are not unduly alarmed, they often return within minutes.

Deer that may sense a hunter intent on shooting them can get as freaky as a mule deer doe when she suspects the presence of a nearby cougar. She doesn’t want her or her fawns to be dinner, and will take whatever evasive actions are needed to avoid the predator

Bucks, on the other hand, seem unaware of danger unless it picks up some predatory vibes, catches a whiff of human odor or sees some movement. Often, if a doe spooks and runs off, a nearby buck may do the same thing without feeling any sense of danger.

This is where it becomes extremely important to remain in a non-predatory mind-set. Think about killing, and things can quickly change and game can vanish without a shot being taken.

Never look deer in the eye, never think about shooting them, scan past the animal, never put a lingering stare on the deer, and if I’m about to shoot, my mind is emptied of all predatory thoughts. Ninety-five percent (or more) of the deer that have fallen to my arrows were dead before they knew their lives were in danger.

I repeat: it’s not necessary you believe this, and hunters can continue to hunt as they choose. However, when I hunt, my purpose is to get close to deer, never get them excited, and if the right buck comes by, I’ll take the shot. Cougars hunt the same way and they are far more deadly predators than most humans.

It’s quite likely this may be the most radical bit of deer hunting lore you’ll read this year. I’m not trying to change your hunting style or your mind-set, but ask you to consider an alternative line of thinking when deer approach. Many of the key hunters in North America, if pinned to the floor with a hammerlock, will agree with these thoughts. All I’m taking is your time (the line from an old song) and my hopes are you’ll give this the mental consideration it deserves.

Feel free to share your thoughts. Do you agree or disagree? Your comments, please. Contact me at dave@daverichey.com. Thanks for your time spent reading this. Give it some thought, and you may or may not disagree.