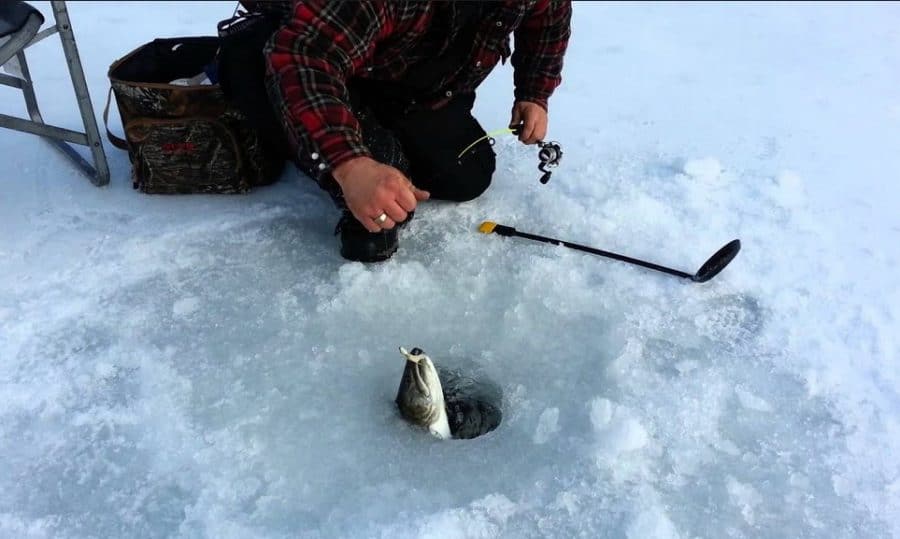 Perch, smelt & walleye fishing can be good in various locations.

The best description of an ice fishermen is so old it should have long grey whiskers. It states that an ice fisherman is a jerk on one end of the line waiting for a jerk on the other end.

If so, count me as one of the half-frozen brethren. I admit to enjoying the sport, and each year look forward to taking to the ice in search of tasty fish. However, we are now closing in on the end of frozen-water fishing sport even though another two weeks of fun may still be had.

Folks might wonder why anyone with a normal intelligence quotient would sit on the cold ice in bone-chilling Arctic winds and swirling snow while facing possible frostbite. Is it necessary?

The answer is yes and no. One can choose to sit out in the cold or use one of the new fold-up portable shanties on the market, light a Coleman catalytic heater , and fish in shirt-sleeves. We do have a choice.

For me, sitting on a frozen lake breathing fresh air is far more relaxing than sitting in front of a television, watching sleep robbers on the tube, eating buttered and salted popcorn and getting fat.

Ice fishing is fun. It can offer wholesome outdoor entertainment for the entire family, and each year more people discover the rejuvenating aspects of fresh air, outdoor exercise and great winter sport.

There is a camaraderie to this sport. Forget your ice strainer, and a neighbor will loan you theirs. Run out of bait, and another angler will step forward and offer enough to get through the day.

If it’s a bitter cold or windy day, sitting out on the ice is a nasty experience. A Clam ice-fishing shanty is a life saver.

Sharing is a human quality, encountered often on the ice. A friend who recently achieved senior status and earned the right to buy a cheaper license, learned about sharing while walking onto the Tawas Bay ice.

A vehicle leaving the ice stopped as he walked across the frozen wasteland. His new friends invited him into their car, drove him the half-mile back to their shanty, unlocked the coop and left him with a warm, fuzzy feeling. The had helped a perfect stranger without expecting anything but a “thank you” in return.

These last two weeks of safe ice remind me of past winter fishing trips. It’s easy to remember the days when fish bit well, but often it’s the little things that mean more to winter anglers. Here are several examples of mine.

Years ago, when lake trout were first making news in this state, three of us fished the west arm of Grand Traverse Bay. We hiked offshore from M-22, and drilled six holes through the ice.

The first two holes went through 12 inches of clear blue ice. The next two holes, moving farther out over deeper water, went through 10 inches of ice. The fifth hole went into eight inches, and the last hole, just 20 yards away, zipped through just one inch of rubbery ice.

We were lucky that day. Grand Traverse Bay has strong undercurrents, and one inch of ice is like walking on cellophane. We withdrew from that hole in an exaggerated spread-eagled duck-walk with our hearts pounding. We drilled the last hole through eight inches of ice over 120 feet of water, and began catching lakers of sweetened jigs and tip-ups.

The water was so clear the creamy spotted lakers rose from the depths with a luminous glow as they twisted and turned below our feet. Those fish fought like caged tigers, and my memory of them and the quality eating they provided, remain with me today.

Another time while participating in a Michigan Outdoor Writers Association winter meeting at Sault Ste. Marie, we jigged for walleyes on nearby Munuscong Bay in bitter cold temperatures driven by a strong north wind. Several walleyes to 20 inches were caught, Swedish Pimples and it wasn’t until our return to shore that someone asked about those “funny-looking” white patches on my cheek, ears and nose.

Anyone who has stared in awe at the famous Richey schnozz, and how my ears stick out like a taxi cab going down the street with both doors open, can understand why they were frostbitten.

My nose, like Pinocchio’s, sticks out so far it suffered hours of subzero cold. It didn’t take much for my ears to attract the cold either. The fierce pain experienced during the thawing-out process was remembered long after the walleye fishing had been forgotten.

Years ago when my four kids ranged in age from four to eight years, they often accompanied me to North Lake near Millington. The lake was filled with bluegills and sunfish, and the winter fish were always hungry.

It was a time when the Old Man could teach them how to fish, and we often spent several weekends each winter in pursuit of fine catches. Once they tired of jigging a tiny teardrop jig baited with a wax worm, they could skate, go sledding or build snowmen.

Once the physical exertion ended, and they settled down to fish, many ‘gills would dot the nearby ice. They helped me clean the catch at day’s end, and never were far away when it was time to tuck into platters of pan-fried fish.

Some fine winter memories were born on Manistee Lake at Manistee when it delivered jumbo pike through the ice. One day, with temperatures in the low 30s and 12 inches of ice underfoot, me and two other fishermen were fishing with sucker-baited tip-ups off the Manistee River mouth near East Lake. It proved to be a day we would long remember.

The pike, some silver and fresh from Lake Michigan, were in a feeding frenzy. Red tip-up flags were popping in the air at almost every tip-up site, indicating fish, and we spend long hours battling pike to 18 pounds.

The fish would make long hard runs, and the braided Dacron line would sizzle through our fingers. Each and every pike would fight until it could battle no longer, and many took 15 minutes of back-and-forth scrapping before the fish could be landed.

There is something savage about a big pike, and when it is time to lead a trophy fish to the ice hole, an angler must take his time and do it right. The long slender snout should be positioned just under the ice hole, and a three-pronged gaff would be lowered under its chin.

Once gaff and fish were properly positioned, the gaff was brought up and sunk into the pike’s lower jaw, and it would come splashing out.

Each fish, long and glistening and tooth-studded, was a victory. Those trophy pike were among the hardest fighting fish to land that has been my pleasure to hook through the ice.

Once, several years ago, the late Al Lesh of Warren, several others and I made a snowmobile trip across Lake St. Clair to a point about a half-mile off Ontario’s Thames River mouth.

The first two spots were unproductive, but the third location was charmed. I lowered a Swedish Pimple sweetened with a shiner minnow within inches of bottom, jigged it twice and set the hook into a walleye.

We fought a rugged battle, that walleye and me, and eventually it came up through the ice hole and was landed. Moments later, another walleye met the same fate, and soon everyone in our party was hooking the tasty fish.

Six anglers limited out that day. Walleyes to eight pounds were landed in what ranks as one of the most exciting flurries of activity I have experienced on the ice.

And people wonder why we dunk bait or lures through an ice hole? They shouldn’t; anyone who has ever tasted winter success will always look forward to the next ice-fishing trip with anticipation and excitement. Good bets this week should be Big Glen (at the narrows) and Higgins lakes.