Choosing ice fishing lures can be a challenge

It’s becoming even more difficult to pick ice-fishing lures now than ever before. There are almost as many made for the winter months as during open-water seasons.

There are three basic winter fish groups I love to catch — bluegills, perch and walleyes. All provide mighty fine eating on my dinner table, but I’ve almost given up on trying for lake trout, pike and splake. 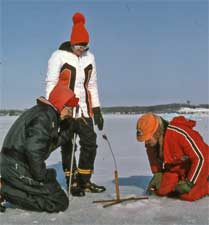 Personally, tip-up fishing is fun for the first hour or two, and then I get bored. If flags are going up, using tip-ups can be a lot of fun. However, it seems as if there are dozens of days where “wind bites” provide the only action while the days when fish really bite well have become scarcer. But that is nothing more than my personal opinion, and many anglers would argue the point.

There have been many days in my not-so-distant past where fishing on Manistee Lake would produce a steady diet of northern pike and walleyes on tip-ups. I guess it’s possible I don’t use tip-ups now as often as I once did.

Besides, I prefer having a rod in my hand and feeling the strike. I’ve used the old-fashioned custom-made jigging sticks, home-made jigging sticks, and rod and reel. I much prefer a light-action spinning rig spooled with two- or four-pound line, depending on what I happen to be fishing for. I usually have one spinning rod set up with six-pound FireLine [5] when jigging for walleyes.

My favorite baits and lures for these game fish are: 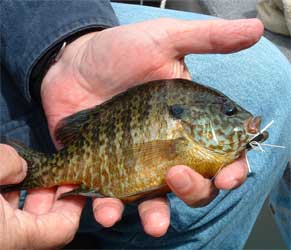 My favorite rig is two-pound clear or green monofilament line and a tiny teardrop jig or ice fly jig. I choose sizes like 1/16 or 1/32-ounce, and buy them in a variety of colors. Yellow is always a good choice, as is yellow with red spots. Countless companies make these wee jigs, and all are productive.

My preference is to pick a 1/16th or 1/3-ounce ice fly or teardrop jig and bait it with a mousie or wax worm. Fish off the edges of green weed beds, and it doesn’t take much effort to catch bluegills and sunfish. Start fishing near bottom, and slowly work your way up at least halfway to the surface.

My bluegill rods have a tiny fine wire spring bobber at the tip. I use coiled wire rod holders, stick the rod in them, lower the jig and bait to bottom. and raise it an inch or two. Jig it a few times, and let the rod and rod holder sit on the ice. Reach down, jig it again, and keep trying different depths or different holes until the fish are located. Moving around is usually more productive than sitting in one place and hoping the fish come to you.

A late-winter bluegill will barely suck in the jig and bait, and if the fine wire bobber even wiggles, set the hook. Occasionally they will hit quite hard, but it’s better to count on a soft take. Don’t set the hook hard or you’ll spend most of the day tying on teardrop jigs.

These game fish are even more fun, and I use a similar rig for perch as for bluegills but use four-pound clear or green monofilament line. Two basic methods work: using a small Hali [4] baited with a perch eye, emerald shiner or a wiggler.

Of these methods I favor an egg sinker on the bottom and two dropper lines spaced six to 12 inches above the sinker and another a foot above that. It’s not uncommon to catch two yellow perch at a time with this rig.

Again, I like the wire rod-tip bobber, but perch often hit hard enough to make the need for a bobber useless. Bait both hooks, making certain the the minnow is hooked in the fleshy part of its back behind the dorsal fin. Hook the minnow too deep, and it will puncture the spinal column and kill the minnow. Ease them slowly to bottom, and reel up slack line so there is a bend in the rod sitting in the rod holder. Lower the minnows too fast, and the rapid descent will tear the minnows off.

Northland Tackle’s[4] perch-size jigs are meant to be jigged up and down, and white, white-red, yellow, yellow with red spots — all work. Bait the spoon’s single hook and lower it to bottom, raise it up a few inches off bottom, and then use short jigging strokes of two or three inches with frequent pauses.

These fish love jigging lures baited with emerald shiners. My favorites are the Hali[1], jigging Rapala [2], and the Do-Jigger or Swedish Pimple[3]. I add an emerald shiner to each hook, and jig it softly with short two-inch strokes. Hard and forceful jigging strokes will litter the bottom with dead minnows.

This is a sport where it’s important to keep moving and trying different areas until a school of fish is found. I use either a spinning or bait-casting rig with six-pound FireLine [5], and make certain the hooks are sharp. Use short jigging strokes, and most fish hit on the up-stroke although some will hit as the baited lure flutters down.

The lure, the bait and the jigging method is what turns all three of these winter game fish on, and fishing through a hole in the ice is a great way to spend a winter day.