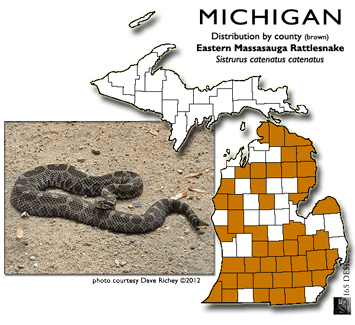 The Daily, The Field, The Woods

CADILLAC – No one has an accurate count on how many Massasauga Rattlesnakes (Sistrurus catenatus catenatus) live in Michigan, but one thing is well known: We have the lions share of the population of this, the state’s only venomous snake.

All the other populations that stretch from Iowa and Missouri up through Illinois, Indiana, Michigan, Minnesota, New York, Ohio, Pennsylvania, Wisconsin, and a small number in Ontario, make up the world’s population.

“These snakes are very scarce, and everywhere else, they are considered  “threatened” or “endangered,” said Michigan State University doctoral candidate Rebecca Christoffel of East Lansing, who was speaking to some Michigan Outdoor Writers. “I’ve studied these little rattlers for some years. They are harder to find than most wildlife in this state or any other area.”

Currently the Massasuaga rattlesnake is listed in Michigan under Special Concern and is a candidate for federal listing.

These small rattlesnakes are shy and reclusive, and are seldom seen

This snake is seen so seldom that there is much that most state residents do not know about these pit vipers. This much is known: the Eastern Massasauga rattlesnake (Sistrurus catenatus catenatus) is quite small, averaging 18.5-30 inches in length. They are thick-bodied, and gray or light brown with large, light-edged, chocolate-brown saddle-shaped blotches on the back with smaller dark spots along the sides. It has a blunt tipped tail with a segmented rattle at the end.

Periods when Massasaugas are active

Massasaugas are active from April through October, and often are seen basking in the sun. Personally, I’ve seen only one live Massasauga rattler other than the one shown in the photo published today.

“Many people are frightened of these small rattlesnakes,” Christoffel said, “but they are quite shy and will try to hide from view to avoid detection. They generally strike only when threatened, and most bites come when people try to handle them. They shake their small rattles, but the sound isn’t as distinct as with a larger rattlesnake. Their rattling sounds more like the faint buzzing of an insect.”

She said that perhaps 25 to 50 percent of massasauga snakebites are “dry,” meaning the snake does not release venom. She added that from  1999-2005, from three to eight statewide snakebites were reported to Michigan Poison Control.

The chances of getting bitten by a Massasauga rattlesnake are very remote. There are certain precautions one can take, and that is to recognize where these snakes may be found. Usually, in the wild, they are found on or near humps of ground; near root wads of fallen trees; and near trash dumped in the woods by ignorant people.

“Learn to recognize possible rattlesnake habitat,” she said. “The ground can be moist or sandy and dry, but there is normally some woody debris on the ground. Piles of fallen tree limbs, leafy areas, sandy hills and marginally wet areas around marsh hummocks are key locations for these snakes.”

She also offers these tips to prevent getting bitten by these short-fanged snakes.

Tips to remember when in possible snake country

The Massasauga rattlesnake is a rather timid animal, and will go out of its way to avoid humans. Michigan has the largest number of these small rattlesnakes, but the population is a relative thing. These snakes are not plentiful even in the best habitat, and they deserve the protection afforded them.