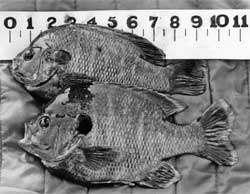 Two deep-water roach (bluegills) to 10+ inches is a great catch. Here’s how.

The tug from deep water was soft but easily identifiable as a strike. My rod rod tip bowed slightly toward the stern, and when I connected with the fish, there was an old and unmistakable feel I hadn’t experienced in many years.

There was a good fish on my line, and it was putting up a fight equal to that of a fish twice its size. This wasn’t a crank-’em-in thing; this was a scrap that required some finesse and skill on light line.

This was on a Traverse City area lake that shall remain nameless for many reasons. A husband and wife team who read my daily blogs has told me about some of their catches. Their fishing method is the same as mine.

Nope, sorry, no lake names this time. Find them & seal your lips with duct tape.

Pick a lake with bluegills, and that means any number of lakes in this area. Look for the deepest water with a fairly open lake bottom, and line up the the boat with the prevailing breeze, and start drifting downwind.

Setting up to bottom-fish a lake is quite easy. The terminal rigging is simple. The best thing to do is rig up at home, line up on the drift, and let out line.

Run six-pound line through an egg sinker, tie it to one end  of a barrel swivel. Tie a three-foot leader with a long-shank bronze No. 10 hook, and then tie the opposite end to other end of the barrel swivel.

Hook a cricket, and lower it over the side and send the egg sinker and bait slowly to the bottom. A too-fast descent can tear the crickert off the hook. Tighten up the line, and if you can’t feel bottom, let out more line. The cricket will float up slightly off bottom at a perfect depth for bottom-hugging ‘gills.

Back when I was a kid, we called these big bluegills deep-water roach. The name is still heard in some areas, but they are nothing more than big bluegills that have learned to head for deep water once the spring spawn is over and the surface water warms up.

This means hunt-and-peck fishing. Bluegills often gather in certain deep-water locations, and it’s up to the fisherman to find them. A slow wind drift works perfectly. Let out enough line to keep the egg sinker bumping along bottom.

Light line means just one thing; within reason, the lighter the line, the more bluegills you’ll hook, but a big ‘gill on two-pound line may be lost unless the ultimate in care is used while fighting the fish. Four-pound or six-pound line may produce slightly fewer hook-ups but an angler has a better chance of landing fish.

Bounce bottom in deep water is one key to success. The other is a slow drift.

The secret means slow-drifting with your bait bumping bottom. Bluegills usually tap-tap the bait, and then pull the rod-tip down. Set the hook gently, and be prepared for a spirited fight. Hook the fish, keep your rod low to prevent other anglers from knowing you are catching fish.

The fish will try to stay deep, and will turn broadside to the pull of the line, and it is a battle all the way to the boat. A slow drift is preferable to a fast trip down the lake because it becomes too difficult to keep the bait nudging bottom where the larger ‘gills will be found.

The middle of the lake often is good, and bull bluegills with the pug noses are usually caught in 20 to 30 feet of water. Fish along the outside edges of weed beds, and keep prospecting for fish. It may be likely that all the big fish will be concentrated in one small section of the lake.

Anglers who find a bull-bluegill hotspot in deep water should never keep a limit. It takes years for a bluegill to grow to 10 to 12 inches, and a lake can literally be cleaned out of big ‘gills in a season by a greedy fisherman.

Keep one or two, and if it’s lots of fish you want to eat, work the shallower water for a bunch of six-inchers. They are better to eat than the big fish, and you’ll be doing the lake a favor by removing some of the small but competitive and hungry  fish.

Not all lakes hold big bluegills. In fact, an angler may wind-drift a dozen bluegill lakes before finding one that holds a decent number of big ‘gills. Once you find such a spot, keep it as secret as one would their favorite grouse or woodcock coverts or a secret beaver pond where foot-long brook trout are caught.

Lakes with a fishable number of deep-water roach are something to protect from greedy fishermen. Anglers who find such a lake are duty-bound to keep their silence and never speak of big bluegills around anyone. Never take and show photos of big ‘gills, and never fish it very often. Resist any temptation to keep a limit. Do that often and you’ll soon lose your hotspot.

To do otherwise is to destroy the very thing that made this inland lake so desirable to you and the fish. It’s the personal ego stroke that leads to heavy catches that soon dwindle down to nothing.