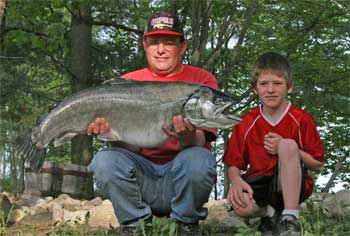 Casey Richey (left) and his son Shane, with his former state-record brown.

All things are relative. A trophy brown when I was a kid was the 11-pounder that George Yontz of Wolverine caught from the Sturgeon River in the late 1950s.

Frankly, over many years of trolling Lake Huron and Lake Michigan for brown trout, I’ve landed many that were big enough to put a hefty strain on my rod, and would tilt the scales to weights from 11 to 19 pounds.

The brown trout is a mystery fish to many anglers. A five-pound brown on the Holy Waters of the upper AuSable and Manistee rivers is a trophy fish. Fish one of those back-of-beyond jump-across creeks, and catch a brown trout measuring 12 inches, and it too is a trophy.

Brown trout numbers have dwindled somewhat in recent years around the Great Lakes. Previously, browns of 20 to 25 pounds were common catches, and the current state record fish was caught two years ago from the Manistee River below Tippy Dam. It weighed in at 41 pounds, 7.2 ounces.

Big brown trout are around but they are difficult to hook and harder to land.

Huron Bay at Baraga and L’Anse on Lake Superior also produce good numbers of brown trout in the past. Another Upper Peninsula hotspot for years has been along the Michigan’s shoreline from Escanaba and Little Bay de Noc south to Menominee. Ten-pound fish were common catches here, and I’ve caught some 11 and 12-pounders near Escanaba.

Lake Michigan’s Grand Traverse Bay, including both arms of the bay, have produced some huge browns. My son David hooked a huge fish on a Rapala years ago, played it with a gentle hand, and lost it when the lure broke apart. Three of us saw that fish, and our closest estimate to its weight was 25 pounds. In higher waters of yesteryear, the Acme Reel along US-31 was a real hotspot.

Harbors at Frankfort, Onekama, Manistee and Ludington also produce big brown trout on occasion. Even some of the southerly ports such as Saugatuck and South Haven have delivered good numbers of browns.

It’s possible to cast spoons off breakwalls or piers at these harbors, and a blue-silver, green-silver, orange-silver, all silver, copper, brass, pearl or other color 1/4 or 1/3-oz. Devle Dog spoons work well. Experiment with sinking time, retrieval speeds and vary between casting straight out off the pier or casting parallel to the pier if no one is in the way.

Trolling produces very well, and the trick is to work in and out of shallow water during the spring months. Years ago, Jack Duffy pioneered this offshore fishery, brought me in on it, and between us, we pounded the big browns for many years. The methods that follow worked for us, and they continue to produce.

FlatFish required a very slow trolling speed, and we’d test lures next to the boat to see if they tracked straight. If so, slowly release line until the lures at least 100 yards behind the boat, and put them into rodholders. Some anglers prefer trolling off in-line planer boards.

Minnow-imitating lures can be trolled faster than FlatFish, but tie a loop knot to the lure’s line tie to open up its wiggle. Again, let two lures out at the same time and speed for about 100 yards, and put the rods in rod holders. Adjust reel drags so a brown can take line on the strike.

Big browns almost always rip off an additional 50-75 yards of line on the strike. Reel the other line in to get them out of the way, and play the fish gently. Often, browns will strike and run toward the boat. Reel fast and hard, and you may be pleasantly surprised when you catch up to the fish when it is about 25 yards behind the boat.

Great Lakes browns grow to be the largest but some big ones come from rivers.

Browns occasionally jump, and most often will roll on the surface. Once they get close to the boat, be prepared for one or more last-ditch efforts by the fish. Watch its head, and if the head cocks to one side or the other, he is planning another run. Let the fish go, and don’t try to pressure them on 6-pound line. A big fish will break the line like sewing thread.

Try trolling near the edges and tips of piers, along the mud line where river water meets lake water, and off a river mouth. Gravel or rocky bars in six to 15 feet of water can be good spots, and the key to good brown trout fishing is an abundance of alewives or smelt.

Catching big browns these days is not easy but my nephew, Casey Richey of Frankfort, set a new state record a few years ago. His record was broken last year with a massive fish from the Manistee River. The big fish are around, but scoring means putting in a lot of time.