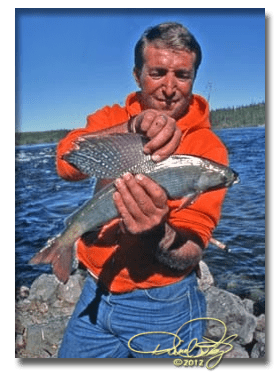 The Daily, The Water, Thoughts

The Michigan grayling were so plentiful 125 to 150 years ago that they were caught to provide food. Some timber companies of the 1880s fed these tasty game fish to the loggers who were cutting down trees nearby.

The fish with the overly large dorsal fin sustained the men who would ultimately destroy them. As large standing timber along streams were cut to allow more sunlight on the river surface, and the trees were rolled into the rivers to gouge out spawning gravel or clog it with sawdust, the beginning of the end was underway.

Over-fishing, timbering, warming of the stream water, and removal of spawning gravel made the inevitable demise of the Michigan grayling a certainty. Some Lower Peninsula streams held grayling until the early 1900s, and a few grayling were found in the Upper Peninsula, until the fish went extinct in the late 1930s.

Many things led to the extinction of Michigan’s grayling

Waters such as the AuSable, AuGres, Black, Boardman, Boyne, Cheboygan, Hersey, Jordan, Manistee, Muskegon, Pine and Rifle rivers once held the majority of grayling in this state. Studying data from a book called Trout of Michigan, by Harold Hinsdill Smedley (books are available from me for $10 plus $3 postage <dave@daverichey.com>), and from a little monograph called The Grayling In Michigan by Charles W. and Edwin P. Creaser of Alma, it quickly becomes apparent the Michigan grayling went extinct soon after logging ended.

The last holdout for the Michigan grayling was in Houghton County’s Otter River where fair to good numbers of fish were still available in the early 1900s. Michigan tried to raise Otter River fish in downstate hatcheries, and many were planted (including some in the Cedar River near Gladwin) but all such plants soon died out.

Other planting efforts took place with the last major plantings of hatchery-reared fish from Alaska and Montana, were made in the 1980s. The fish were planted in the AuSable and Manistee rivers, and in several; small Upper Peninsula streams, and in a few select lakes in both peninsulas, but after three years they had vanished without a trace.

I’ve caught Arctic grayling in northern Saskatchewan, Canada’s Northwest Territories, and in Alaska. I truly wanted to catch a Michigan grayling after the most recent plants 30-some years ago, but even though they had to be released alive if hooked, I didn’t want to jeopardize the health of any of these delicate fish.

Other anglers, fishing near planting sites on the AuSable and Manistee rivers, caught many of these fish while fishing for trout. Most were returned to the water alive, but it seems that handling them led to their quick demise.

Apparently it wouldn’t have made much difference because the fish soon disappeared. Grayling did live a bit longer in some cold inland lakes, but I suspect other game fish ate the small grayling for lunch.

The original grayling of this state averaged 8-11 inches with an occasional fish to 14 inches. By comparison, I landed a 4 1/2-pounder in Great Bear Lake in the Northwest Territories. It was mounted in all of its majestic colors, and some slob stole it from a display at the Outdoorama show at the State Fairgrounds in Detroit in the early 1980s.

The large sail-like dorsal fin allowed these fish to put up a good fight. It was like battling a big bluegill when the fish turns its side to the pull of the line. Grayling threw up that big dorsal fin, and the fight became more difficult. They are wonderful to eat, and had the distinct odor and taste of the herb thyme.

The color photo above was taken on Great Bear Lake of an Arctic grayling. The b/w creel photo was taken by a gentleman named Hanselman of Ann Arbor about 1886 and shows a nice catch of Michigan grayling from Bear Creek, a Manistee River tributary.

The grayling in this state are gone, and will probably never be seen in our state waters again. However, the city of Grayling owes its name to this great game fish that, like the passenger pigeon, is now extirpated. And state residents are much poorer for that loss.