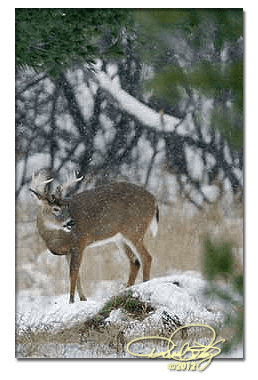 The Daily, The Woods, Thoughts

This snow isn’t too deep for deer; belly-deep snow exhausts the animals

A study of deer facts can make anyone a better bow, muzzleloader, rifle or shotgun hunter. Here are some things to bone up on during the off-season.

A deer’s home range is the area that annually covered by deer while eating, mating, resting or caring for fawns after birth. The radius of a home range usually is less than a mile in diameter.

Home ranges often are elongated, and may decrease in size as animal populations increase. One exception occurs during the rut when a dominant buck travels widely. A buck’s home range decreases in size as the animal grows older or as the local deer population increases.

The theory of migrating whitetails was once ignored by wildlife biologists, but too much evidence exists of migratory patterns in northern ranges, especially during a severe winter. A case in point are whitetails along the Lake Superior drainage system once fall weather starts acting like winter.

Deer do migrate in some parts of the state

In a bad winter (which can coincides with the firearm deer season), deer may travel many miles to find shelter and food. If deep snow falls during the hunting season, look for migration trails that will cross state highways and back roads into heavy conifers or other dense yarding areas. Migrations from the Lake Superior shoreline gains strength as snow piles up, and deer move into huge yarding areas like the Hulbert or Tahquamenon swamps near Newberry, Michigan. during bad winters.

Such has not really been the case in many areas,. Most of Michigan this winter has dealt with little snow. Near Traverse City,  for instance, we often have 80-100 inches of snow by New Year’s Day and it just keeps piling through February and March.

The last I knew, about a week ago, the area had received about 25 of snow, and then it melts and disappears.

Deer in southern counties seldom yard up because of severe weather, but such is not true in northern areas. Once snow reaches a depth of 12 or more inches, and cold winds howl, deer head for yarding areas by the most direct route.

Deer yards are often in thick cover with thermal conditions

They choose evergreens (balsam, cedar and pine) where cold, snow and wind have less impact on them, and the dense cover provides some thermal protection against body heat loss. In Michigan, deer-yard confinement is considered to be 20 weeks during a bad winter and 12-14 weeks in milder weather.

Some deer movement is normal except in severe conditions

Deer often bed in thick brushy cover during the day and near feeding areas in the evening. During snowy winter months, deer may venture from a deer yard briefly to feed but return to its confines during the coldest parts of the day or night or whenever snow becomes too deep for easy travel.

Deer require up to one bushel of browse daily to survive the winter. A matriarch doe often leads groups of three to five animals to feeding areas, but if weather is severe and browse is in short supply, does will kick fawns away before they can eat. This is one reason why deer mortality among young-of-the-year deer is very high in bad weather.

A dominant buck will lose 25-30 percent of its body weight during the rut, and that weight must be regained before heavy snows fall or it will likely perish.

Falling temperatures often put deer on the move. However, the reverse is also true in Michigan’s northern areas during winter months. The colder the temperature during November and December, the more deer will move to stay warm.

Deer activity decreases in high winds and heavy snow storms. During lengthy snows, deer may be inactive for up to three or four days with very cold temperature says, and will move heavily once a storm passes through. That’s the time to go hunting if the season is still open.

Watch the weather forecasts, and see what the 24-hour forecast will be. Hunting is often good immediately before a storm front moves in providing it brings a sudden drop in temperature. If a major winter storm is predicted, it might pay to be afield earlier in the day than normal to take advantage of a whitetails predictable feeding patterns.

An active scrape features a strong urine smell, hoof prints and antler tine marks. Hunt 30-40 yards downwind of an active deer scrape during the first three days of the firearms season. Most but not all scrape activity has ended by the firearm season opener as the rut winds down.

Those does are ready to be bred, and this knowledge can help a hunter fill a buck or doe tag.

Acorns rate high in nutrition and are easily found during the fall if the mast crop is good, but some years oak mast fails. Most of the state’s corn fields have been picked except in southern counties, but a standing corn field will attract deer all winter if it is near heavy bedding cover.

Does often stomp their fawns to death during a bad winter. It’s a bad thing to watch, but it’s nature’s way of allow the strong to survive and the weak animal eventually waste away with no marrow in their bones and a fuzzy face. That’s when the coyotes come calling, and a deer yard takes on the appearance of an abattoir.