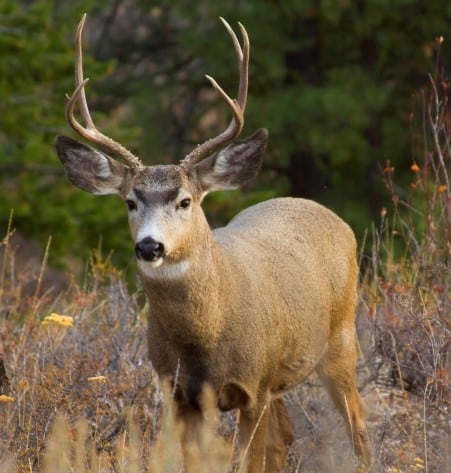 Many years ago I was hunting a local area, and I kept seeing a really nice buck. I had a strong feeling that something was wrong with the animal but had no visible clues.

I glassed it with binoculars and even a spotting scope, studied it from all angles, and didn’t want to waste my tag on it if the buck had been wounded. There was no noticeable limp, no legs dragging, and no apparent sign the buck was hurt in any way.

Still, a niggling thought kept coming back to me: this buck is hurt. Should I shoot it?

A tough question to answer

There were too many questions and no logical answers. The next day I sat in a tree stand overlooking a nearby trail. I’d seen the buck travel both ways on this trail, and the only thing that I hung my suspicions on, was the fact that this buck seemed to move too slowly to be in good health.

I’d been in my tree stand for an hour when I saw him walk out of a marsh. Tall marsh grass covered  most of his body but beautiful points stood high above his head. He moved very slowly, and didn’t appear to favor either leg, but the more I watched him, they greater my feelings that this buck was in pain. The noticeable hump on the right front shoulder was difficult to see back inn heavy cover.

He approached my stand, and the wind was in my favor. He hung back, and two or three does and fawns, squirted past my stand, and he stood motionless for 10 minutes. The other deer were out of sight when he decided to step out into the open.

Each step was slow and methodical, a study in caution. He stayed screened by brush for long minutes as he took a step or two, stopped and studied the terrain all around him. He acted as if he had been shot at before by a bow hunter, and wasn’t taking any chances of it happening again.

Apparently satisfied, he took two or three more steps, and exposed his vitals to a broadside shot. I waited, and he turned his head in the direction that the does and fawns had traveled, and I eased back to full draw and made a smooth release.

The Carbon Express arrow sliced in low behind his front shoulder, hitting the heart and lungs, and his back legs kicked backward as it appeared to hump up slightly, and off he ran out of sight. I heard the buck go down, and it was a simple trailing job. I followed the Game Tracker line, and found the buck dead 70 yards away.

I field dressed the animal, and the meat near his shoulder was green. I kept skinning him out on that side, and the more hide I removed, the more green tissue I found.

This deer had gangrene all through its body, and even though there was no reason to suspect it was ill, a further autopsy proved the cause. The buck had been hit high in the shoulder, and the three-blade replaceable-blade broadhead had broken apart on impact.

The hunter who had originally shot the buck had been hunting from a tree stand, and the broadhead had penetrated until the replaceable blades impacted on the top of the shoulder blade. I kept skinning, and eventually found the tip and three bladess buried under the hide.

Gangrene had set in

The buck had been hit several days before, and it was in a spot where the animal couldn’t lick the wound, and it just kept getting sicker by the day. The hunter couldn’t recover the buck because the arrow wound wasn’t that bad, but as time went on, a major infection set in.

This buck walked normally, didn’t favor the leg on that side, and it wasn’t the broadhead that would have eventually killed that buck if I hadn’t shot it, but it was slowly dying from a nasty infection.

The buck was useless to me or anyone else, and I informed the DNR about the animal, and they said to leave it to the coyotes. I took photos of the broken broadhead, and two days later the coyotes had reduced the carcass to bones and hair and saved that animal from being eaten alive.

A deer, hit in a non-vital area that it can lick and keep clean, will almost always survive. It’s such animals as this that become almost impossible to hunt. I’ve killed many deer that have been wounded by other people, and in many cases the deer would have survived.

A wounded deer doesn’t always die. In fact, studies have shown that if blood loss is kept to a minimum, and no internal organs or major blood vessels are cut, the chances of a successful recovery are good. However, minor flesh wounds will heal quickly and often within a week or less, the animal will be up and moving around.

Know this, though A deer that recovers from an arrow wound is one savvy animal. Shooting and killing that deer can be a supreme hunting challenges of all.