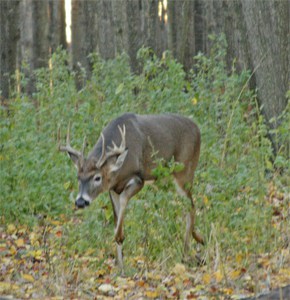 Seeing a nice buck up close and personal is great fun.

Everyone knows that whitetail deer hit the chow line in farm fields every evening an hour or so before dark, especially in the early season. It’s one thing to set up along a field edge, and spend most of the evening watching deer at a distance.

It’s another thing to spend most of the night hunting. Granted, setting at the edge of a field in an elevated coop, ground blind, pit blind or tree stand, is much different than effectively hunting deep in the woods.

There are times when small deer ooze out of the woods and pass close to field-edge stands, but it really isn’t something a person can count on to happen on a daily basis. What they can count on is having better opportunities by sitting in a stand back in the woods, away from the edge.

Here’s the scenario. Deer leave their bedding areas, and mill around, back and forth, while slowly making their way toward the feeding fields so they will arrive an hour or so before the end of shooting time. Plan your set-up properly, and there is a very good chance one of those deer will drift past your stand with plenty of shooting time left.

Deer, as they move toward the fields, become much more suspicious and spend more time checking the edges when they get within 50-75 yards of the field. I’ve often watched bucks and does stand back in heavy cover for long minutes at a time, and study the area for danger.

The hunter that sets up shop 100 to 150 yards from the field (closer if the bedding area is near the field) has a much better chance of dealing with deer that are still wandering freely and are not nervous.

These animals often are led by a mature doe, and if you want to shoot bucks, it is imperative that the does and fawns do not smell or spot you as they pass by. Picking a spot this far from the woods requires finding an area where two or more trails move from the bedding area and join up to funnel deer traffic out into the field via specific trails.

Sitting at a field edge may allow a bow hunter to see five or 50 deer, but seeing them at a distance and having them within easy bow range, are two entirely different things. I know lots of people who are prone to saying “I saw 15 deer tonight, and five were bucks.”

They seldom say they saw those deer at a distance of 100 to 300 yards. Seeing deer is fun, but unless one is set up on the proper deer trail where a shot may be had, seeing deer doesn’t mean squat.

My idea of seeing deer is having the animals inside 20 yards. I know I can’t shoot 100 yards and hit a deer, but I know that any buck or doe within 20 yards, is in serious danger should I decide to shoot.

The reason I like whitetails close is I can’t see well, and I also know what my shooting limitations are. So, I work at getting close and do my best not to be spotted or winded by moving animals.

It goes without saying that anyone sitting in an open tree stand must be constantly mindful of the wind and of being scent-free. I wear my old Scent-Lok underwear, a new Scent-Lok suit, knee-high clean rubber boots and know how to sit still, and how and when to take a shot.

Seeing a dandy buck at 200 yards is a major thrill, but think about what a kick it would be to have that same buck move within 20 yards of you. The adrenalin flows through your blood stream like it is being shot out of a fire hose, and when the moment of truth comes, will you be ready?

I can promise one thing. A hunter who sees that buck at 200 yards will never be ready for a shot when the animal stops, 18 yards away, tests the wind and scrutinizes the trees.

Looking and seeing lots of deer is fun, but frankly, such stands seldom pay off with decent shots. Those hunters who have given up looking at lots of deer, and are content to see one or two bucks at close range, are those that get my vote for being a savvy hunter.