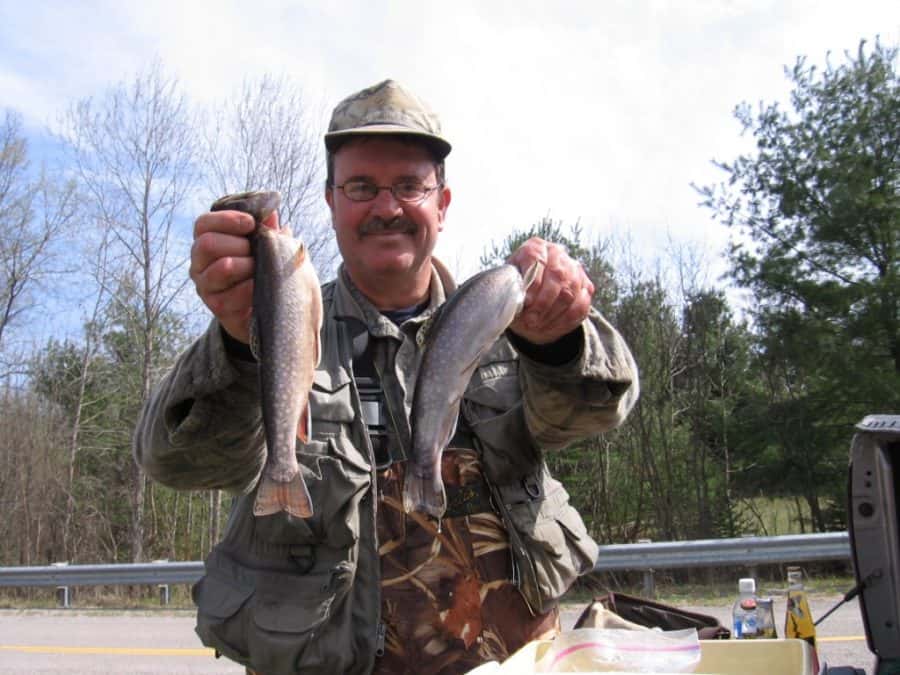 Doug Esch says it takes lots of hard work and searching to find brookies like these.

A special thrill is experienced when prospecting for those speckled little fish with a square tail, white piping along their fins and blue spots along a dappled flank, and it comes whjen we find them. They can be pretty good at hiding themselves, especially in August and early September as they prepare to head into their spawning season.

This is the time of year when I love old two-tracks through the woods, over-grown and faint trails, and following the twists and turns of a creek flowing through a cedar swamp.

Find flowing water, and follow it upstream or down, and when the trail doesn’t peter out at a bridge, then it becomes time to put on your hiking boots and go exploring. It’s also a time to carry a good compass, because I’ve been in some of these situations where it’s easy to get turned around or lost.

Find the nastiest tangles to walk through, and it’s where we find brookies.

The fact you are  reading this piece is proof positive that I was able to find my way out. But, on occasion, it meant many miles of unnecessary walking through rugged country.

Often, it’s not a long walk but one never knows what they will find. It could be a beaver pond filled with muck and little water, or a gleaming one-acre pond glistening in the early sunshine and nearly as beautiful as the fish we seek.

Sometimes the creek remains a creek and is thick and overgrown, and here we dap a single-hook spinner in holes under the root wads of cedar or spruce trees. This water flowing through the roots is caused by centuries of flowing water seeking its easiest route downstream.

There are times when a brookie will be hiding under  every opening that gives access to the water, and these fish are always hungry. One moves from hole to hole, dapping a tiny spinner into each hole.

Some of these creeks will produce brook trout and some will not. That’s the thing about these game fish: they aren’t always where an angler expects to find them. Some will be found in an open stream hiding alongside a fallen tree branch; others may be in the deeper holes of a larger river; and most require a long and dedicated search.

Some waters hold brook trout and others don’t. Prospect for fish.

Several years ago, after covering the AuSable River Canoe Marathon, I was heading for West Branch on business. Halfway between Tawas City and West Branch, an urge came to me and it took me down a dirt road for several miles.

The road eventually turned into a two-track, and it took me down a hill and I soon spotted a glint of sunlight off water. I checked it out, and there was a beaver pond. It was one I’d fished nearly 50 years before, and it produced trout again.

“Seek and ye shall find” is an old saying, and it is doubly true for August and September brook trout anglers. Brookies are easy — too easy — to catch once they have been found, but finding the fish can be a definite problem or the perfect reward.

I was lucky to again find that spot near West Branch after all those years that had passed since I’d last fished it, but if I hadn’t taken the initiative, and followed my gut instincts, that experience would have been lost forever.

Optimism, boot leather, patience and time is what leads to finding brook trout.

I’m a writer, and as a rule writers are curious and inquisitive folks. They want to learn things they don’t know, and perhaps I was born to be a writer. Many things interest me, but none more so than tracking down a hot new brook trout hotspot.

There have been boot-sucking mud, old bogs that stink, and crystal-clear little creeks where the brook trout are easily seen. Some of these spots where brook trout call home are way back of beyond while others lurk closer than we think.

It’s the search that attracts me . It’s a bit like fishing, something like hunting, and often a pleasure when we learn that the spot holds brookies. In years gone by, when I was more up to such things, I’d often try to find five or 10 new brook trout hotspots in one day.

The next day I’d do it all over again but in a different location. After two days of searching, and marking spots on my maps, I’d start fishing each one in turn. Some produced only tiny little brookies that were the size of a finned jewel.

Other spots would produce 12 to 14-inch fish, and some were very darkly colored while others were a lighter hue. Often these spots would be within a half-mile of each other, and the fish wore distinctive coats of different colors.

That’s the fun and the joy of brook trout fishing. One never knows what color or size the brookie may be, but it’s always a pleasant surprise. Brook trout never disappoint me, even when the season ends at the end of September.

I just wait, and count the days until the next trout  opener.