The Daily, The Field

A truck is the best way to approach a blind. Truck drops off & picks up hunters.

OK, folks, which is the best way to walk to your deer-hunting stand? Skulk along like you are trying to sneak up on the deer or just walk straight-forward without trying to sneak from one tree to the next?

In this country, opinions are like elbows: everyone has at least one. You may disagree with my thoughts, and I may take issue with yours, but we should each respect the other for the right to speak up for their choice.

My vote goes to grabbing the bow and walking directly to the blind. Climb into it, settle down, get ready for deer activity, and it seems to work for me. A deer that may observe me walking along, and ducking into a blind, isn’t frightened by my actions. I do nothing to frighten the animal.

Walk with head up, don’t look at deep, and don’t appear to be sneaking along.

The deer may circle the area, pick up a tiny bit of scent, but not enough to spook them. It goes on about its business without being unduly alarmed. People on foot are common in the deer woods.

A sneaking or skulking hunter, one who tiptoes toward the hunting blind while darting from bush to bush, attracts far more attention from deer. An upright man may cause deer to run off 50 yards and stop in heavy cover to see what happens, and when nothing does, their fear disappears.

A hunter that acts suspicious, and causes deer to become alarmed, do themselves more harm than anything else. They literally drive deer away by their actions.

The sportsman who wishes to reach his blind as quickly as possible, should walk steadily (don’t run or sneak), and when he reaches the ground blind, elevated coop or tree stand, should get into position with a minimum amount of noise, sit down and sit still.

Once the hunter reaches his hunting area without incident, disappears from sight into the blind or stand, he is soon forgotten. They don’t seem to pose any danger to the deer, and the animals soon revert back to normal feeding patterns.

Climb into position in a tree or open the door to a ground blind. Don’t make noise.

A moving pickup truck is always studied by nearby deer, and as long as it moves along steadily and the people inside stay inside when the truck stops, it doesn’t unduly frighten the animals.

There are times when a truck can pull up to a blind, a hunter can ease out and get into the stand, and then the truck pulls away. Deer can’t count. The truck pulls in, stops for a half-minute, and then moves on. Just don’t slam the truck door or make noise getting your gear out of the truck bed.

People may think getting into a stand scares deer. It doesn’t as long as everything acts natural and there are no loud and unexpected noises. It’s noise that deer might hear a hunter make from inside the blind or from a tree stand that will drive deer crazy. An unexpected sneeze or a cough will trigger the alarm button.

Moving directly to the stand in a normal walking pace is the best way to get there. It’s the straight-line rule between two points that is important; providing the sportsman doesn’t have to walk through a bedding area. 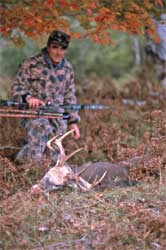 Ignore any deer and walk at a normal pace to the blind.

A person who ignores the deer and walks at a steady pace to his blind often cause the deer to bound away but they usually do not snort and spook.

This year, just to prove it to yourself, try walking right along without lifting your head or stopping to look at deer, and climb into the stand and sit still. If that doesn’t convince you, try sneaking from bush to bush and tree to tree, stopping frequently, and skulking about, and see how often you get snorted at.

You’ll soon learn what works best and what does not. It takes many things coming together to make a deer hunt end with a shot at a good buck.

It makes little sense to do anything that may draw attention to your presence on stand. Just walking steadily to a blind makes a great deal of sense to me.