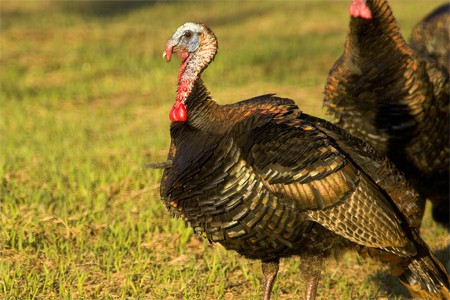 This jake is a good bird for a first-time turkey hunter.

Many decades ago, when turkey hunting was only practiced in southern states, using a decoy was unheard of because they hadn’t been invented yet.

And now, anyone with one or two gobblers to his or her credit has two or more decoys stuffed in the back of their hunting vest. Some folks use as many as five decoys, and I wonder how they can find time during a hunt to put out such a large flock of fake birds.

Hunters who have fallen into the turkey decoy habit may have missed the heart-pounding excitement of calling a gobbler through the woods, and have it come to the call looking for you. The bird may arrive from any direction, including the wrong one, and the hunter must be patient and vigilant as the gobbler struts, drums, gobbles, spits and tries to find the hen. Often the bird may be within a few feet of the hunter, setting your nerves a’jangle.

I was calling for my wife in Iowa several years ago. She was sitting slightly uphill from me as I worked a gobbler on and off for an hour before he shut up. I had my back to a big maple, my left elbow on a wire fence, and was ready to hang it up when something brushed my elbow.

It was a gobbler and a big one. The bird was less than a foot away. I sat still, and the bird walked down hill, jumped through a hole in the fence, and walked within two feet of my boots before heading uphill to her. Kay killed a 28-pound gobbler, and regardless of where you live or hunt, this is a huge bird. 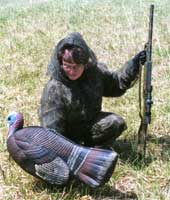 Kay Richey places the finishing touches on this jake decoy.

But this is about turkey decoys, and although I think there is more excitement when hunting without the fakes, I always carry two or three. A flock of four, five or six decoys may work, but I find it cumbersome to carry that many fakes folded up in my vest.

Hunters ask: “Do decoys always work?” The answer is no. I’ve seen many cases where they didn’t work, and many cases where they may have spooked incoming birds, but on average, if they are properly used, a decoy can toll in a big ol’ Tom. One major problem is it’s possible that two many gobblers may have seen one of their siblings get dusted, and if they see a decoy, some birds head for distant parts.

There have just been too many cases noted among very accomplished hunters where birds come just so far to a small spread of decoys, turn and head off in another direction. Decoys are not a cure-all for all turkey-hunting problems. Good hunting skills are needed.

There are some key things for turkey hunters to remember when using decoys. Here are a few to keep in mind when the season opens. 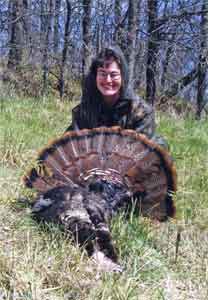 Kay Richey poses with a nice gobbler take while using the tactics from this article.

Be careful and stay away from other hunters.