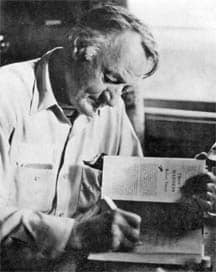 John Voelker (Robert Traver) signs a copy of one of his trout fishing books.

Snow-covered trees and gusty breezes greeted the dawn, and sporadic flakes fell as the John Deere snow blower threw the snow into a nearby field. Cleaning my driveway of five inches of mushy snow gave me nearly three hours of uninterrupted time to think.

One thought came to mind. It was from a 1984 trip to the Upper Peninsula to fish the legendary Frenchman’s Pond with famous author John Voelker who wrote under the pseudonym of Robert Traver. I was eager to get to the pond, and had realized a personal dream that had been gnawing at me for many years.

Fishing “Frenchman’s Pond”; with Johnny Voelker was a longtime wish.

“The more you want something, the more you anticipate it,” Voelker said, sensing my impatience as we stopped to pick blueberries, chantrelle mushrooms and black raspberries. “That means Frenchman’s Pond will be a bigger thrill once we finally get there.”

We eventually slid down what passes for a trail to his secluded cabin on the pond. The two-track leading into it was a mix of boulders, corduroy trails, rocks and sand. His battered old fish car was bouncing from side to side as he tried to keep it between the trees.

Frenchman’s Pond glittered like a rare jewel amid a sea of cedar and spruce. Here and there a brook trout rose to an unseen insect, and my dream of visiting this hallowed water had become a reality.

It was like coming home after a long absence. I was speechless with the pond’s beauty, and Voelker wisely stood by quietly and allowed me to absorb the rare mood of the moment without interruption.

Frenchman’s Pond was Voelker’s private retreat. He had owned it for over 30 years when I first visited it over 25 years ago. It’s location is a closely-guarded secret, and the brookies are as shy and reclusive as the owner is to many people. We had traded letters, and I had interviewed him on several occasions, and it took a few years before the fishing invitation came. 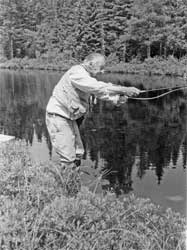 He knew I wanted to fish it, but by nature, he didn’t trust many people that lived below the bridge, and like it or not, I had to measure up. What his standards were for admittance to the pond were unspoken. Therefore the invitation to fish came as a huge and unexpected surprise.

“Why don’t you c’mon up and fish Frenchman’s Pond with me?” he asked one day. “The trout are notoriously camera-shy, but we may be able to hook one or two.”

An invite to fish the pond was like a special request to dine with the Pope or Queen Mum. It wasn’t something to ignore or refuse. To do so would have sealed my fate and kept me away for all time.

I was full of questions. Would the trout rise? Which flies and sizes produced best? Any tips on fishing the pond?

“Chances are good we won’t catch a fish,” he said. “And if we do get lucky or skillful, as you fishing writers are wont to say, the brookies will probably be small and take only tiny dry flies.

We fished from casting platforms built around the pond, and I changed flies frequently. Brookies rose whenever the sun went behind a cloud but only one came to my fly. It missed or I missed, and that was that. I figured the old Judge had educated most of them.

Voelker had several rises to his tiny flies but failed to hook up. We crouched low on the platforms to reduce our silhouette, made adequate presentations but the trout weren’t impressed.

“That’s what I like about brook trout,” Voelker said over a ritualistic sundowner of bourbon Manhattans during our U.P. cribbage championship game. “Brook trout are not impressed with who or what you are, or how much money you have, but they are responsive at times to a gentle and quiet approach.”

All of this happened many years ago but our time spent together is permanently etched in my brain.

It’s been well over 25 years since that trip, and it’s been many years since his death, but I returned two more times by written invitation to fish with the old master. I would never go back even though I know where the pond nestles like a rare diamond in a green forest.

John Voelker fished around his last bend many years ago, and one day I may report what he told me about the frailties of old age and death’s looming presence.

For now, on a warmer and snowy day, I’m satisfied with remembering this man of letters, writer of vibrant books on trout fishing, and masterful novels such as Anatomy Of A Murder. He taught me a valuable lesson that day, and it’s one I occasionally pass on to others.

“There is more to fishing than catching fish,” he said. “Learn to savor each day like a fine wine, listen to good music, fish often and keep few fish. Learn about life from brook trout because they are found only in cold, clean waters, and when brook trout disappear from our wild places, mankind won’t be far behind.”

Those are words worth remembering, and that the old Judge uttered them with a hitch is his voice, meant they came from his heart. The Bard of Frenchman’s Pond had spoken, I had listened, and took his heartfelt advice with me when we drove away.

I remember Johnny Voelker (Robert Traver).. I remember the man, his little sayings, his attitudes about brook trout and the waters where they are found, and I’l never forget the old-timer, his Parodi cigars, his lively method of writing, and the waters he most loved to fish.

He was a one-of-a-kind man, and one I’ll never forget. He still stirs my imagination.