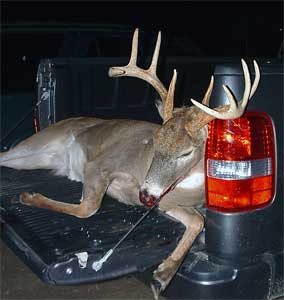 The trick is getting a big buck into a truck bed without killing yourself.

It happens every year. Joe Hunter sits in his stand, patiently waiting for a buck to come sneaking along.

He’s hunting alone, and after a period of inactivity, he looks out and spots the buck of his dreams moving his way. He readies his bow or firearm, and when the time comes, he shoots and kills the buck.

His heart is racing like a horse coming out of the gate, and he walks to the animal, admires the buck and rack, and proceeds to field dress it.

About this time, the thought comes to him that he is alone. It’s impossible to get his vehicle close to the deer, and he begins the arduous task of trying to drag the buck ou alone, which is never a good idea.

Don’t try to be macho, and drag a deer alone. Get some help!

Somewhere along the way, he feels a pain in his chest, and it increases in intensity, and over he goes with a heart attack. Some fortunate hunters survive the ordeal, and sadly, others do not.

The photo above shows a solitary hunter preparing to drag out a buck by one antler. Trust me, it doesn’t work very well.

We always have a lengthy (36 to 48-inch) piece of one-inch wood dowel. With it is several feet of strong rope.

I’m not big nor am I strong but I’ve dragged out several deer by myself with this rig. It works best with snow on the ground, but the important thing is to get both front legs and the head off the ground.

Gut the buck and roll it onto its back. Tie antlers, head and front legs to dowel.

Roll the buck over onto his back, and place the wood dowel on the ground and under its neck near the base of the antlers. This will keep the buck’s back and hind end on the ground. If you do it the other way around, and have its abdominal cavity on the ground, within 10 feet, it will be filled with dirt, grass, rocks and other debris.

Don’t wear yourself out. If you can only drag it 10 feet at a time, do so, and rest often. Don’t get too winded and start sucking air. If it takes three hours to drag it out, do it slowly and don’t over-exert yourself.

Too many people think it’s macho to drag out a buck alone. Not only is it not a macho move, it is a stupid one. None of us are accustomed to dragging out deer single-handedly. Get help or go slow.

It becomes much easier if two people are hunting nearby, and the other offers to help drag. Lash the front legs, head and neck securely to the dowel, and put one person on one end of the dowel and one on the other end. Two people dragging causes less exertion but it involves weaving around brush piles, saplings or trees.

There are devices with wheels that allow the animal to be placed inside it, and then the cart and deer can be pulled or pushed through the brush. This doesn’t work well in a tag alder thicket or cedar swamp.

It’s much easier (some of the time) in many locations because we can often drive near to the fallen animal. We can usually get to within 100 yards of the deer, if a good shot has been made, and there are always two or three people around to help in getting the deer loaded.

This becomes very important if someone shoots a truly huge buck. Some animals will weigh 250 to 300 pounds, and it’s almost impossible for one person to lift that much weight to place it in the back of a truck.

Another scenario that works, especially with several inches of snow on the ground, is to tie the deer to the back end of a four-wheeler. I try to get the head off the ground, and tie it in place, and than drive slowly to drag it out to a more convenient location.

Dragging deer out of the swamp or woods can be hard work. Older (and even some younger hunters) would be wise to seek help whenever possible. If alone, try my dowel trick and drag it a ways, stop and rest and allow your heart beat to slow down, and drag some more.

There isn’t a buck in the world worth dying for. Take your time, and live long enough to enjoy seeing that handsome rack on the wall and medium-rare tenderloins on your dinner plate.