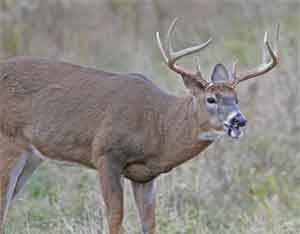 There was a hunt I was invited to several years ago, and one of the people among about 20 invitees was one of the country’s top 10 target archers.

He could drill holes in a target and never miss. He could stack arrows, and I watched him do it several times (he was sponsored by an arrow manufacturer and got all the free arrows he could ever use), and watching him shoot targets was misleading. Most of us thought he could shoot a deer blindfolded.

He was the top personality at this hunt, and everyone else who was just a hunter wasn’t considered a big deal. The hosts of the hunt picked all the best spots, and saved many of them for the target archer.

It was a predictable situation for the target archer.

The sponsors needn’t have bothered. The bow hunters were quite content with our allotted stands, but we looked on with obvious concern as we knew what would probably happen to this celebrity hunter.

None of us were jealous of the target archer. This ol’ boy was being set up, and it was rather hard to watch. He was being hung out to dry.

We weren’t disappointed. The target archer who could stack arrows on demand missed two shots at deer the first day, missed one the next day from another great stand, and missed two more on the third and last day of our hunt.

The final score was 19 deer for the 19 bow hunters and zero deer for the hotshot archer. How could such a thing happen?

Call it what you will: buck fever, target panic, whatever … the target archer had an acute case of the shakes whenever a deer wandered within range. The poor guy was under great pressure to perform, and when he did, he made a giant mess of things. Many of us felt sorry for the guy.

This self-inflicted malady can happen to anyone. Most seasoned hunters who have shot enough deer with a bow to know how to escape the trembles that overtook that poor guy. One of the guides said he shook like the leaves on an aspen tree in a brisk breeze.

Hunters who can shoot tight groups, stack arrows on occasion, and seldom miss the heart-lung area on a 3-D target, can fall apart when a buck moves closer. Their heart rate goes off the chart, they hyperventilate, sucking for air, and if they manage to draw the bow, who knows where the arrow will hit. Chances are it won’t hit the deer in a vital area.

Some easy tips to avoid this problem.

Most people try to hide the problem, saying the buck was just a bit too far away or that it jumped the string. If a bow hunter shoots an arrow that travels 180 feet-per-second or faster (which is almost everyone that shoots a modern compound bow), it will impact he deer before the animal hears the bow twang, providing the animal is within 20 yards.

So, “jumping the string” is an excuse that doesn’t hold up under close scrutiny. Of course, true experts of the excuses could say the animal was 30 yards away, but why bother? A miss is a miss.

Beating buck fever isn’t easy but it can be conquered. The only way to do it is to put yourself in close proximity to deer, learn what to expect your body to do when a big burst of adrenaline kicks in. They also must learn how to control their nerves, and only experience can teach that.

Find someone who has a few pet deer in a small enclosure, and ask to sit in a tree nearby to watch them without a bow in hand. Bucks or does in a five- to 10-acre enclosure can never escape being close to humans. Put some food out, and the hunter can learn what to expect. Go to a petting zoo, and get close to deer. Use your hands and an imaginary bow to practice.

This is obviously something a person must work at, and if you want to do it, there is no law against sitting in a ground blind or tree stand on private land during the off-season providing you aren’t carrying a bow and arrows or a firearm.

Learn how deer move, what their habits are, and the more time you spend around deer, the quicker the sight of a deer within bow range will stop jump-starting the adrenaline flow. It may take a season or two to conquer this fear of failing to meet the expectations of yourself and your hunting buddies but it helps to work at it.

The second part of learning this technique.

The second part of the equation is to learn how and when to draw, how to avoid the panicky feeling that overcomes a hunter when they try to draw their bow, aim and shoot a deer. The best way I know to learn how to do it is to draw on every deer within your preferred shooting range.

You’ll spook some deer, but perfect practice will instill a perfect ability to size up the deer and the situation. Make enough mistakes and learn from each one, and soon you’ll conquer that fear.

Curing buck fever isn’t easy but it isn’t difficult if the hunter is willing to work at it. Once several deer have fallen to well-placed shots, and you’ve drawn on a bunch of deer each season without being spotted, one day you’ll realize that you are excited but not trembling or even breathing hard.

That’s when you know you’ve made a quantum leap into the big time of bow hunting.