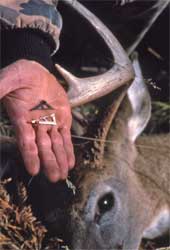 The Daily, The Field, The Woods

The obvious answer to the title is “no.” Some deer will die if injured and others will not, and this often depends on the type of injury, where it is located, whether vital organs are involved, and other things.

I’ve encountered numerous injured deer over the years. Some are the result of a doe kicking one of her fawns, others have been gored in a buck fight, and a few have been wounded by a hunter.

A leg injury may put a deer on the mend for a few days, and recovery is possible if the animal can lick the wound and keep it clean.  Deer wounded or injured by another animal may not make it if the injury is in a location where it can’t be licked.

These replaceable-blade broadheads were found in a previously wounded buck.

Two decades ago we had a few hunters on our lease who couldn’t shoot straight. Me, my wife Kay and close friends, would hunt those wounded animals. If they looked like it would lead to a fatality, we would shoot the deer to end its suffering.

Some years ago Minnesota conducted tests to prove the fatality of wounded deer, and they found it wasn’t nearly as high as some people thought. Three years ago we had a very nice buck that had been hit high in the shoulder, and several of us saw the buck, but the animal was always too far away. One hunter saw the wound was filled with pus, and the order went out that anyone who saw that buck within easy shooting range, must shoot it.

This animal looked like a hunchback. Every time the right front leg would go forward, the hump high on the shoulder would raise six or eight inches when it took a step. The wound was where the buck couldn’t lick it.

Two days after I suggested killing that buck, one of my friends tagged it. The deer had been hit high in the shoulder, and the animal  lived long enough to grow the hump. It was never seen eating but was always on the move.

A deer hit in a front leg usually survives. They lick the leg, and keep an infection from forming, and soon the deer is up and moving around without a problem.

Some bucks have been shot, and the arrow zipped through the chest cavity without hitting the heart or lungs, and such bucks often survive. It may lay the deer up for a week or two, but death doesn’t always follow a pass-through shot.

An arrow can pass between the lobes of the lung, missing lungs and heart, and live.

Several years ago I passed up a buck that walked down a trail near my stand, and it appeared to have a slight limp but was moving fine. I let him pass, and noticed some hair was missing from the off-side front shoulder.

The next day found me in the same tree, and here comes the same buck on the same trail. When the buck presented a high quality shot, I drew and shot, killing it.

The reason for the limping buck was obvious. Another hunter had shot from a tree stand, and the replaceable-blade broadhead had hit high. It missed the spine, and caught the buck high in the shoulder but near the spine, and the buck couldn’t get to it.

I skinned out around the earlier wound, and it was filled with pus and the shoulder was green with gangrene. It would have eventually died from the wound, but was still moving well when I shot it. Interestingly enough, two of the three replaceable blades broke off and littered the wound area.

A thin blood trail with bright red blood usually means a minor muscle wound that will eventually clot and stop bleeding. Most shots hit the brisket or the inside or outside of a front leg. The chance of recovering such a deer is  very slim.

Knowing where an arrow hits can tell hunters whether to wait two or three hours or take the trail immediately. An obvious wound in the paunch, far back from the lungs, can mean a long trailing job unless a vital organ such as the liver is hit.

Know where you hit the deer. Many people really don’t know where an arrow hits.

Leave gut-shot deer alone for several hours and hope the coyotes don’t pick up its blood trail. After a lengthy wait, a deer will travel only 100 yards or less, lay down and stiffen up or die. Push gut-shot deer, and it can travel long distances and may never be found.

This points to one reason why a hunter should  know how his bow shoots, where the animal was hit, and with some experience, most wounded deer can be found. Those with a minor nick on the leg or brisket will live to become a much wiser buck in the future.