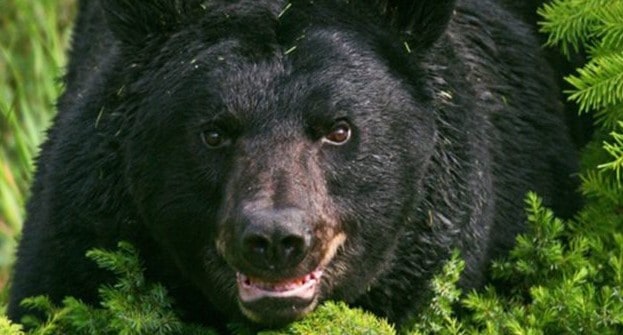 A bear might look cute and cuddly, but people who live in bear country know looks can be deceiving. They also know that if a person is within 100 yards of a bruin, his or her life could be in danger. The key word here is “could.”

Bears, right now, are moving around. Their breeding period occurs during summer months, and boars are looking for receptive sows.

Those sows with nearly two-year-old cubs are sending the kids off on their own so they can breed with the largest boar in the area. This means that people who frequent cedar swamps, berry patches, other dense and thick areas, could encounter a bruin.

This is a 125-pound bear that could kill a person.

Make no mistake about it: some black bears attack. Some do not, but people shouldn’t walk around without being aware of what is going on in the woods around them. A sow with cubs is always a potential threat, and boars occasionally attack.

Black bear encounters can be sticky or the bruin may run at the first sight or smell of a human. But here are some recorded black bear attacks by animals that didn’t play by the rulebook.

*The Early 1900s: Frank Devereaux, of the Cheboygan area, was attacked by a bruin after he shot the animal in the flank with a muzzleloader. The bear struck the man on the head and killed him after biting him on the leg. The animal was later found dead a short distance from Devereaux’s body.

A wood sign was placed at his grave site and it reads: “Here lies F. Devereaux, killed by the ferocity of a famous bear, in whose memory this monument has been erected out of generosity of his grandson.” A marble headstone was added years later.

*July 7, 1948: Three-year-old Carol Ann Pomranky lived with her parents in the Upper Peninsula in a remote U.S. Forest Service fire-tower cabin near Brimley. The girl was playing outside when a 125-pound bear pulled her off the cabin porch. The animal dragged her into the woods, killed her by biting through her neck — severing her spine — and fed on the body. The bear was killed the same day as it returned to feed on the girl’s corpse.

This bear killed and partially consumed its victim.

*June 5, 1960: Arthur DeGault, 71, of Engadine was attacked by a sow with three cubs. The man happened on the bears by accident, and when he tried to get away, she attacked and bit his thigh. He hit the sow with his fist, and it stood erect to swat and bite him as he tried to back away. He drew a knife and stabbed the bear several times. The bruin fled, and he walked a mile to his home. His injuries required 100 stitches.

Peninsula’s Porcupine Mountains. He awoke in the morning and heard a bear prowling around. The animal knocked his tent down and began dragging it away.

Cameron rolled from the tent, lay motionless on the ground, and the bruin grabbed him by the throat with its teeth. He screamed, and the bear dropped him and ran away. A 125-pound sow with two cubs were later killed as they ransacked his abandoned tent.

*Autumn, 1976: Joe Newman, Sr. of Palmer was grouse hunting and nearly stepped on two sleeping bear cubs. They squalled, and Newman was charged by the sow. The bear was shot three times at point-blank range with a 20-gauge shotgun. Newman was not injured.

*June, 1978: Michael Patterson, 19, of Alma, was attacked by a boar and climbed a balsam tree to escape. His back and legs had been bitten and scratched by a bear, but he died of a ruptured lung and kidney. It’s thought a bear pulled the man from the tree, and the fall killed him.

*September 19, 1982: John Skosnik of Warren was bear hunting and apparently shot a sow that was accompanied by unseen cubs. The wounded sow charged the hunter and bit him numerous times before leaving.

Bears are very unpredictable. There have been several very close encounters between me and adult black bears but I have never had a major problem. But the next bruin I meet may prove to be an exception to the rule. Never trust a black bear, and whenever possible, avoid any confrontation.

Bears have invaded Traverse City again this spring, and these wandering critters of late spring and early summer are almost always young two-year-old boars. All are trying to find a new home, somewhere where larger bears won’t be running them off or trying to kill and eat them.

This is a much larger bruin. It can out-run a horse for a short distance.

I think it’s neat that bruins can live fairly close to civilization. However, too many bears near large population centers frighten little old men, women and children. How people react to bears at close range can determine the outcome of such encounters.

Whatever you do, never run from a black bear. It can cause the animal to chase you, and bears can out-run a galloping horse for 100 yards or more. Stand your ground, make yourself look as large as possible, and talk – don’t shout – at the animal. If it’s possible try to back away but never turn your back on a bear.

Over many years I’ve had a sizable number of face-to-face encounters with a bear. I’ve yet to be attacked, but have had a few bruins conduct false charges from a short distance away. Trust me, if you’ve never been at the end of a false charge, you’ll think the bear is going to eat you up. Often, it’s possible to softly talk a bear out of continue the charge and forcing it to charge.

Softly spoken words, and standing face to face with a bear, calls for some courage. Turn and try to run under such circumstances can turn what is really a bluffing false charge into a real attack. Common sense, remaining as calm as possible, and time may cause the bear to walk away, and that’s always a good thing.