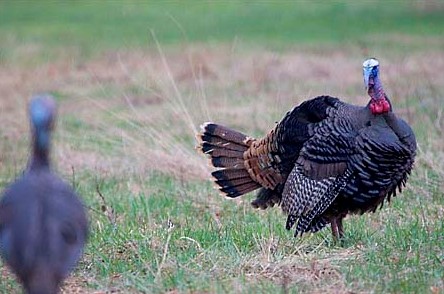 Many years ago, when turkey hunting was popular only in southern states, using a decoy was unheard of, and for one simple reason. They hadn’t been invented yet.

And now, almost ever hunter with one or two gobblers to his or her credit has two or more decoys stuffed in the back of their hunting vest. Some use as many as five decoys, and I wonder how they get time during a hunt to put out such a large flock of fake birds.

Hunters who have fallen into the turkey decoy habit may have missed the heart-pounding excitement of callingto  a gobbler through the woods, and have it come to the call looking for you. The bird may arrive from any direction, including the wrong one, and the hunter must be patient as the gobbler struts, drums, gobbles, spits and tries to find the hen. Often the bird may be within a few feet of the hunter, setting your nerves a’jangle, as you wait for him to move to a spot where you can shoot.

A large flock of midwinter turkeys.

I was calling for my wife in Iowa several years ago. She was sitting a bit uphill from me, and I worked a gobbler on  and off for an hour before he shut up. I had my back to a big maple, my left elbow resting on a wire fence, and was ready to hang it up when something brushed my elbow.

It was a gobbler and a big longbeard. The bird was less than a foot away. I sat still, and the bird walked down hill, jumped through a hole in the fence, and walked within two feet of my out-stretched boots before heading uphill to her. Kay killed a 28-pound gobbler, and regardless of where you live or hunt, that is a huge turkey bird.

But this is about turkey decoys, and although I think there is more excitement when hunting without the fakes, I always carry two or three. A flock of four, five or six decoys may work, but I find it cumbersome to carry that many fakes folded up in my vest.

Hunters ask: “Do decoys always work?” The answer is no. I’ve seen many cases where they didn’t work, and many times where they may have spooked incoming birds, but on average, if they are properly used, a decoy can toll in a big ol’ Tom. One major problem is it’s possible that two many gobblers may have seen one of their siblings get dusted, and if they see a decoy, some birds head for distant parts.

There have just been too many cases noted among very accomplished hunters where birds come just so far to a small spread of decoys, turn and head off in another direction. Just seeing a small bunch of decoys spooked the birds. Decoys are not a cure-all for all of your turkey-hunting problems. Good hunting skills also are required.

There are some key things for turkey hunters to remember when using decoys. Here are a few tips to keep in mind when the season opens this spring.

Proper decoy placement can pay off.

*Have the jake turkey facing you at 25 to 35 yards. An adult gobbler can and usually will go to a jake decoy, and face it although they sometimes slip in from the rear. The gobbler, once his attention is riveted on the jake decoy, usually forgets everything else. Wait until the bird turns his body and lifts his head and neck to make that area visible for an accurate shot. Don’t shoot at gobblers when their head and neck is down to their shoulders.

*If you know where the gobbler will come from, it’s possible to position the jake decoy 20 yards out and 20 yards to the opposite side of your position. The adult gobbler will walk past you on his way to smack the fake jake around. It offers an ideal shot. Just make certain you have the shotgun up to your shoulder and be ready for a shot before he reaches the decoy. Things can get a bit frenzied when a gobbler goes after a jake.

An adult bird that spots a jake decoy may come or may not. He may be ready to fight, and may hang back. A long-spurred gobbler, once he gets riled up, will put the spurs to a jake. I’ve had more than one jake decoy shredded by the hooks of a big gobbler, and it doesn’t take long for it to happen. It’s a sight to behold, and there’s nothing nice about it.

*Once, many years ago, I had a single hen decoy out and a light breeze made Henrietta turn just a bit on her stake. I had taken an old aluminum arrow, cut it in half, and put a target point on the end that goes into the ground. The end of the stake that went into my decoy had a washer next to the insert, and then another target point was used. The threads went through another washer, and screwed into the insert. This allowed the decoy to move slightly in the breeze, which adds a convincing touch of realism to a decoy spread.

A gobbler began a slow approach through the woods, and when the bird was 50-60 yards away, the wind picked up and gusted hard. The wind blew the hen decoy around in a full circle, and that movement didn’t put a gleam in this gobblers eye. He ran off like his tail feathers had been scorched.

When I returned home, I found another scrap aluminum arrow, cut it in half, painted it dark brown. I moved the decoy tail back and forth, and inserted one of the stakes at each end of a half-circle swing. If the wind gusts, the decoy would move a bit but not too much, and it added even more realism to my set-up.

*I dislike a motionless decoy. Watch real hens, and they are head-up, head-down, flapping their wings, shaking their feathers and moving around. Your decoy should do the same, but it’s hard to make that happen unless there is enough breeze to stir the decoys and make the move.

*My preference, when hunting near a field, is to have the hen decoys out about 15 yards past the jake decoy and away from where the gobbler  will come. Separate the hens (if using more than one) by at least 15 to 20 yards. They can be positioned facing in most directions away from the jake.

*Most decoys are made so the stake can be placed at an angle. I like at least one hen decoy to be tipped forward with its head near the ground as if feeding. It makes your rig look more realistic.

One way to use an old shredded hen decoy.

*One of my old hen decoys has been jumped and half-shredded by a randy old  gobbler. Often, when gobblers are breeding hens, I use this hen and lay her flat on the ground, and place a jake decoy astraddle her. This can bring a longbeard streaking in to rescue the hen for his personal pleasure.

*I’ve owned and used many different decoys. I dislike gaudy looking jakes with too much red (and have seen some with orange heads). To me, they just don’t look real.

*Spread your decoys out. Don’t jam them together because this is what threatened birds do before they fly or run. Do not use decoys with erect heads. One with its head up is fine, but change the body and/or head position of the others. Don’t have all the hen decoys facing the same direction.

*Decoys require some experimentation. Move them around, but I’ve found that keeping a jake decoy between hen decoys and the woods gives the illusion that the jake is keeping them corralled.

*If a gobbler is seen coming fast or slow to the decoys, let the fake birds do their job. Too much calling  is a major mistake. Two or three hens, if they are feeding and spot an approaching longbeard, will usually shut their beak. Take a cue from the real birds. Don’t call too much but play this part of the hunt slow and easy. Do this, and you’ll probably punch that gobbler’s ticket when the season opens about three months from now.