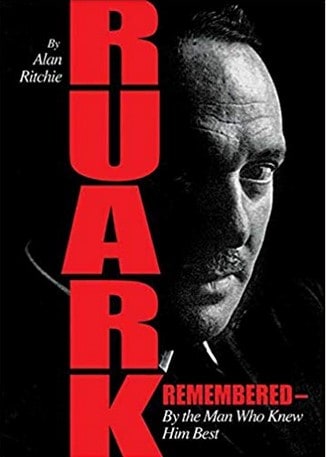 Ruark Remembered By The Man Who Knew Him Best by Alan Ritchie and edited by Jim Casada. Published by Sporting Classics. The book can be ordered from Casada at 1250 Yorkdale Drive, Rock Hill, SC 29730-7638. $45 postpaid.

Anyone who has read my writings over 41 years, and has followed my decades of book reviews, surely knows about my love for the writings of Robert Ruark. He first captured my interest and soul back in the 1950s when his “Old Man & The Boy” stories appeared monthly.

I greeted each magazine installment with great passion, and finally purchased the book by the same name when it was first published. Now, more than 50 years later, I still read the book once or twice each year. It is, without question, the finest piece of outdoor writing I’ve read.

To say I’ve had a longtime love affair with his writings would be an understatement. He, much like Ernest Hemingway before him, and Peter Hathaway Capstick after him, abused his body and his liver, with heavy daily administrations of alcoholic beverages. It led to an early death for one of the greatest writers of all time.

Now, I’ve been given another Ruark fix – Ruark Remembered By The Man Who Knew Him Best – written by Alan Ritchie. Ritchie served as Ruark’s secretary for many years, and kept copious notes about the man he considered his best boss and best friend.

Make no mistake about it. Ruark was no angel, and could be a hell-raiser when he chose to act up. He was a very complex individual, and Ritchie pulls no punches when describing some of his boss’ escapades, sexual and otherwise.

Jim Casada, as the books editor, pulled together some 800 double-spaced pages, Americanized the spelling and writing (Ritchie was British), and pared the fluff down without removing any of the author’s original flavor.

This is a book, after just one reading, that must be read again and again to ferret out the true intent of Ritchie’s work. The author spent most of 17 years after Ruark’s death writing this work. Casada had to spend weeks pulling it into shape, arranging the chapters in a semblance of order, and then much more time editing it to make it read well.

This book covers Ruark’s life (1915-1965) from childhood to middle-age, and it reveals all the good, bad and ugly things about his 50 years of life. It also gives readers a greater sense of who and what Ruark really was.

He was many different things to many different people, but it seems his greatest love was for the African continent, its animals and its people. It was there he met the famous profession hunter Harry Selby, and they would remain friends until Ruark’s death.

A sampling of chapters in this book will help readers determine much of the content of this book, but they are only teasers. It’s the material inserted between chapter-heads that make this book such an interesting read. Ruark, all by himself, was an amazing man, and one capable of setting a mood with whatever he happened to write about.

Book chapters include: Harry Selby Looks Back (the introduction), The Boy Alone, Chapel Hill Days, The Boy Takes On The World, New Horizons, Belt-Level Journalist, First Footsteps In Africa, Ritchie Joins Ruark, Putting Down Roots In Spain, The Early Books, A Love Affair With Africa Begins, Expanding Literary Horizons, Ruark In His Prime, New Problems & Poor No More, Africa Again, The Last Books, Ruark As A Columnist, The Man Who Was Robert Ruark, Problems With Parents, Money Matters, A Love Affair With Africa Continues, Ruark On Safari, Attacked By A Leopard, New Vistas In Africa, Personal Insights, Demon Rum and Health Problems, Payboy Bob, I Know He’s A Bastard, Life’s Compass Lost, Last Trip To Palamos, The Honey Badgers At Work, and The End Of A Grand Run. There are 274 pages and many black-and-white and color photos.

Ruark captured my soul with his The Old Man and The Boy stories, and then The Old Man’s Boy Grows Older book. As a youngster I took to these articles and read and re-read them. They were an important part of my childhood and my growing-up process, and many of the stories I read in those early days have stuck with me for more than a half-century.

Some of the things revealed in Ruark Remembered run contrary to what I felt him to be back when I was at an impressionable age. None of us are ever what we seem, and it’s likely Ruark may have had a few more warts than the rest of us.

That said, this is a great book, a wonderful read, and a glimpse into the life of my childhood hero. It’s best, I feel, to remember him as I do from the late 1950s. For me, remembering Ruark means going back to a time when life was much simpler and being a boy was easier than it is now.