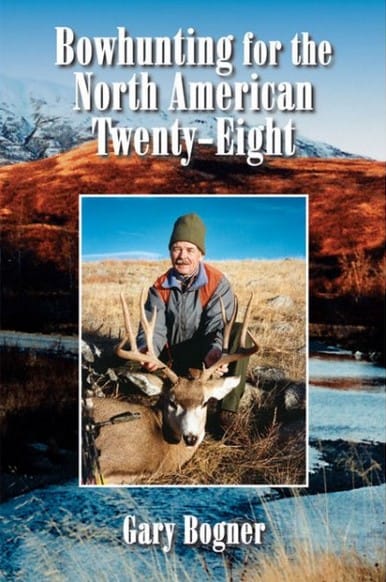 I’ve never had the chance to shake and howdy with Bogner, but he is from Michigan, and I’ve known of he and his hunting exploits and charitable work on behalf of game and their habitat, for many years. There are other well known hunters who have taken all 28 North American game species, but not many who have done so with a bow and arrow.

Bogner believes in the rules of Fair Chase, and all of his bow hunts are planned according to these basic rules that govern ethical hunting. Some of this hunts required three, four or more attempts to take the animal with a bow under the most difficult of conditions.

This taking of a quality specimen of the 28 species of big game animals is more than one man’s dreams: it became his obsession. Bogner made four hunts to take his Dall ram, and his quest for a bighorn sheep in deep mountainous snow will make your hair stand on end.

This book is more than the ramblings of a man who spent great sums of money to realize his dream. While many sportsmen will never have the chance to duplicate his efforts, they will have the chance to read about how and why he put himself through so much hard work. He may or may not be a perfectionist but he does know what he wants, and once that urge needs scratching, Bogner lines up a guide and goes hunting.

This is a hunting book but it’s also a tale of sheer determination. This hunter is now a retired airline pilot, and concentrates on taking more bow hunting trips, being a real estate developer and a bank founder. Bogner’s list of credentials include being one of only eight people who have taken all 28 North American game species, and taking Africa’s Big Five, all with a bow.

He has been president of Safari Club International twice, and he has worked tirelessly to support animal conservation and the preservation of the environment. This is a book that details one man’s dream to hunt wild game and his fight to help protect it.

It is a rare individual who will subject his body and equipment to the challenges he so willingly accepts. This book is filled with pride of accomplishment, of helping the environment, the animals he hunts, and the true love of the hunt.