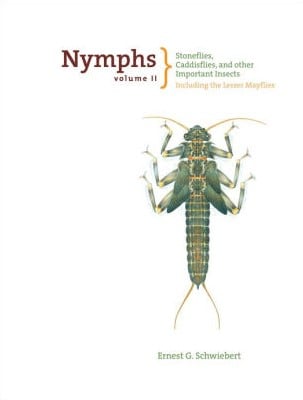 This is a huge, heavy book, and a revised and enlarged edition of the original edition of 1973. As great as the earlier edition was, the new printing makes this a much better book and a fitting tribute to the author who sadly passed away in 2005.

Schwiebert was a world traveler, a high-profile fly fisherman, public speaker, the author of several books including Matching The Hatch, which he authored in 1955 at age 24. It solidified his standing among fly fishermen from that day forward.

Make no mistake about it: Nymphs II is a monumental work, and will be a classic among fly tiers and fly fishermen, and a choice piece of fine work among armchair anglers who devour every word Schwiebert ever wrote. This book offers 787 pages of detailed studies on nymphs, and it is illustrated with 16 color plates of nymphs as well as b/w drawings.

The nymphs discussed in this huge fact-filled book belong to:

Ernest Schwiebert was a well known fly fisherman who really knew his craft. His books were filled with the stuff that make flyrodders drool: big bugs, tiny flies, fishing techniques, history of nymph fishermen, and much more. This is a must-have book for any fly fisherman who want to learn from the late master.

A trout fishing library without this book would be seriously flawed by its omission. It is, without doubt, the book by which other nymphing titles will be measured.