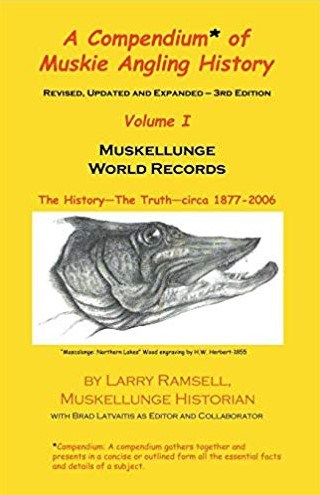 Ramsell, a muskie historian from Hayward, Wisc., wrote the first definitive history of muskie fishing in 1982, and the first printing of that book is now worth $500 on the used and rare-book market. providing one can be found. A second printing paperback book was published in 1997. This set of two books is a revised, updated and expanded third edition with a great deal of new information.

Some may wonder what a compendium is. It is something that gathers together and presents in concise or outline form all the essential facts and details of a subject. Ramsell has done exactly that with this book.

He covers the widest possible range of information on muskies and muskie fishing. The information contained in these two books is a major increase in information from the first or second editions. This 645-page Volume I (Volume II will be ready by the time you read this) is filled from cover to cover with the most amazing collection of muskie material ever pulled together.

I’ve fished with Ramsell, and he is more than a muskie historian and researcher. He is a muskie fisherman, and a very good one at that. The numbers of 40-pound fish he has caught and released is astronomical, and I’m happy to have put him on to one in the Upper Peninsula.

This and the second book in the set is filled with historically important b/w photos. Chapters include:

Perhaps Ramsell should have been a farmer because he is very good at digging up information. This book brings to light some key information on:

Whenever a big potential muskie has been caught in the past, it seems that many people do not believe it. And for good reason because numerous weights and lengths have been falsified over the years. But Ramsell, and his collaborator Brad Latvaitis of Michigan have pooled their talents in a new and information-filled new book.

This book is a must for any muskie fisherman, and that is especially true for those people who collect muskie titles. However, considering the rapid increase in value of Ramsell’s 1st hardcover edition, it’s possible this two-volume set will be of great interest to anglers and historians as well as a collector’s item that will increase in value over the years. This set is a winner!